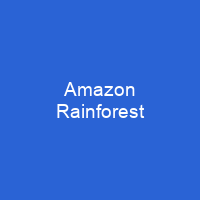 The Amazon rainforest comprises the largest and most biodiverse tract of tropical rainforest in the world, with an estimated 390 billion individual trees divided into 16,000 species. The rainforest has been in existence for at least 55 million years, and most of the region remained free of savanna-type biomes at least until the current ice age.

About Amazon Rainforest in brief

More than 30 million people of 350 different ethnic groups live in the Amazon, which are subdivided into 9 different national political systems. Indigenous peoples make up 9% of the total population with 60 of the groups remaining largely isolated. The name Amazon is said to arise from a war Francisco de Orellana fought with the Tapuyas and other tribes. More than a third of the Yanomamo males, on average, died from warfare. During the Amazon rubber boom it is estimated that diseases brought by immigrants, such as typhus and malaria, killed 40,000 native Amazonians. The rainforest has been in existence for at least 55 million years, and most of the region remained free of savanna-type biomes at least until the current ice age when the climate was drier and savanna more widespread. It appeared following a global reduction of tropical temperatures when the Atlantic Ocean had widened sufficiently to provide a warm, moist climate to the Amazon basin. There is a debate, however, over how extensive this reduction was. Some scientists argue that the rainforest was reduced to small, isolated, isolated areas separated by forest and grassland. This debate has proved difficult to resolve because of practical limitations because of the practical limitations of working with moist tropical vegetation in the basin. The Amazon rainforest comprises the largest and most biodiverse tract of tropical rainforest in the world, with an estimated 390 billion individual trees divided into 16,000 species.

The majority of the forest is contained within Brazil, followed by Peru with 13%, Colombia with 10%, and with minor amounts in Bolivia, Ecuador, French Guiana, Guyana, Suriname, and Venezuela. It is believed that the drainage basin of the Amazon was split along the middle of the continent by the Purus Arch. Water on the eastern side flowed toward the Atlantic, while to the west water flowed towards the Pacific across the Amazonas Basin. Within the last 21,000,000 years over the last glacial maximum over the Atlantic there has been significant changes in rainforest vegetation. The current rainforest is largely intact but extended less far to the north, east and east than is seen today in the north and south, south, east, and east of Brazil. It has been named Amazonia after the Amazons of Greek mythology, described by Herodotus and Diodorus. In the Eocene, it is believed the rain forest extended as far south as 45°. It expanded again during the Middle Miocene, then retracted to a mostly inland formation at the lastglacial maximum. It was last seen in the late Cretaceous–Paleogene extinction event, when the extinction of the dinosaurs and the wetter climate may have allowed the tropical rain forest to spread out across the continent. It remains intact today, but is seen less far north, south and east, than it did earlier in its history, and less far east than it was in the mid-20th century. It also remains largely intact in its current form.

You want to know more about Amazon Rainforest?

This page is based on the article Amazon Rainforest published in Wikipedia (as of Dec. 31, 2020) and was automatically summarized using artificial intelligence.