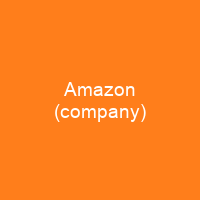 Amazon. com, Inc. is an American multinational technology company based in Seattle, Washington. The company focuses on e-commerce, cloud computing, digital streaming, and artificial intelligence. It started as an online marketplace for books but expanded to sell electronics, software, video games, apparel, furniture, food, toys, and jewelry. As of 2020, Amazon has the highest global brand valuation.

About Amazon (company) in brief

Amazon. com, Inc. is an American multinational technology company based in Seattle, Washington. The company focuses on e-commerce, cloud computing, digital streaming, and artificial intelligence. It started as an online marketplace for books but expanded to sell electronics, software, video games, apparel, furniture, food, toys, and jewelry. In 2015, Amazon surpassed Walmart as the most valuable retailer in the United States by market capitalization. In 2017, Amazon acquired Whole Foods Market for US$13. 4 billion, which substantially increased its footprint as a physical retailer. In 2018, its two-day delivery service, Amazon Prime, surpassed 100 million subscribers worldwide. Amazon is known for its disruption of well-established industries through technological innovation and mass scale. Amazon has been criticized for practices including technological surveillance overreach, a hyper-competitive and demanding work culture, tax avoidance, and anti-competitive behavior. In January 2021, Amazon invested with over USD 278 million by opening two new centers in Italy and creating over 1100 jobs. On February 2, 2021, Jeff Bezos would be stepping down as CEO and transition to Executive Chair of Amazon’s board in Q3 of 2021. Andy Jassy, who is currently CEO of AWS, will replace Bezos as CEO of the company. As of 2020, Amazon has the highest global brand valuation. Amazon also has a publishing arm, Amazon Publishing, a film and television studio, Amazon Studios, and a cloud computing subsidiary, Amazon Web Services.

It produces consumer electronics including Kindle e-readers, Fire tablets, Fire TV, and Echo devices. In May 1997, Amazon went public. It began selling music and videos in 1998, at which time it began operations internationally by acquiring online sellers of books in United Kingdom and Germany. In 2012, Amazon bought Kiva Systems to automate its inventory-management business, purchasing Whole foods Market supermarket chain five years later in 2017. In 2007, Amazon pulled out of the Borders arrangement with plans to launch its own online store. In 2011, Amazon announced a partnership with DC Comics for the exclusive digital rights to many popular comics, including Green Lantern, Green Lantern and Sandman. In 2013, Amazon was awarded USD 51 million in damages for violating the terms of the Digital Millennium Copyright Act (DMCA). In 2014, the company was awarded USD 51 million in damages by the U.S. Federal Trade Commission (FTC) for violations of the Fair Trade Act (TC) and the Electronic Commerce Act (EC) of 1998 (including the sale of e-books, music, movies, software and accessories). In 2013 the FTC ruled that Amazon could not charge users for the use of its cloud-based services such as Amazon Cloud Service (AWS) and Amazon Cloud Services (ECS) in the same way as Google, Apple, Microsoft, and Facebook. In 2016, Amazon became the world’s largest online marketplace, AI assistant provider, live-streaming platform and cloud computing platform as measured by revenue.

You want to know more about Amazon (company)?

This page is based on the article Amazon (company) published in Wikipedia (as of Feb. 04, 2021) and was automatically summarized using artificial intelligence.