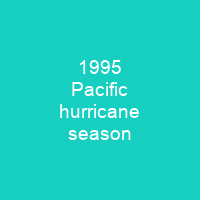 The 1995 Pacific hurricane season was the least active since 1979. Of the eleven tropical cyclones that formed during the season, four affected land. The strongest hurricane in the season was Hurricane Juliette, which reached peak winds of 150 mph. The season marked the beginning of a multi-decade period of low activity in the Eastern Pacific.

About 1995 Pacific hurricane season in brief

The 1995 Pacific hurricane season was the least active since 1979. Of the eleven tropical cyclones that formed during the season, four affected land, with the most notable storm of the season being Hurricane Ismael, which killed at least 116 people in Mexico. The strongest hurricane in the season was Hurricane Juliette, which reached peak winds of 150 mph, but did not significantly affect land. There were fewer tropical storms than the average of 16, while the number of hurricanes and major hurricanes were slightly below average. The season marked the beginning of a multi-decade period of low activity in the Eastern Pacific. No tropical storms formed in the Central Pacific Ocean, as well. For the first time in four years, Barbara was the only tropical cyclone to exist within the basin, but it entered as a weakening tropical storm, and quickly dissipated, without affecting land. It was the first of several seasons with lower than normal activity. The Accumulated Cyclone Energy index is a measure of the power of a tropical or subtropical storm multiplied by the length of time it existed. It is only calculated for full advisories on specific tropical and subropical systems reaching or exceeding wind speeds of 39 mph. The seasonal activity during 1995 was below normal, and marked the first  of several seasons with lower than normal activity in the Pacific Basin. A westward-moving tropical wave entered the Pacific Ocean in mid-May. The system developed into Tropical Depression One-E on May 21, while located about 400 mi south of Manzanillo, Mexico.

While it was developing, locally heavy rainfall fell across southern Mexico along the disturbance’s northern periphery, with rainfall totals peaking at 18 inches at VallecitosPetatlan. On May 23 the depression dissipated. On June 16, Tropical Storm Adolph exhibited a well-defined outflow pattern, and rapidly strengthened to hurricane status on June 17. The same day, Hurricane Adolph turned to the northwest and attained the same major hurricane status that late that day. A tropical depression developed off the southwest coast of Mexico during the middle of June, and developed as Tropical Depression Two-E. It dissipated on June 20, and on June 21, a tropical depression formed off the coast of southwest Mexico. It developed into a tropical storm on June 22, and by June 23 it was at tropical storm status. The tropical storm developed as a banding-type eye developed as it moved westward under the influence of a high-pressure system to its north. By June 25, the storm was at hurricane status, and it moved to the north-northwest. It then dissipated in the Gulf of Tehuantepec, near the Mexican coast. On July 1, the tropical storm became Tropical Storm Gil, which made landfall near Cabo San Lucas with winds of 100 mph, resulting in moderate damage but no deaths. It later weakened into Tropical Storm Flossie, which passed within 75 miles of Baja California Peninsula, producing moderate winds and killing seven people.

You want to know more about 1995 Pacific hurricane season?

This page is based on the article 1995 Pacific hurricane season published in Wikipedia (as of Dec. 05, 2020) and was automatically summarized using artificial intelligence.