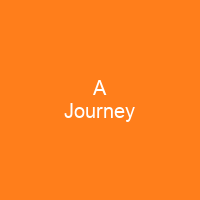 A Journey is a memoir by Tony Blair of his tenure as Prime Minister of the United Kingdom. Published in the UK on 1 September 2010, it covers events from when he became leader of the Labour Party in 1994. It became the fastest-selling autobiography of all time at the bookstore chain Waterstones. Reviews were mixed; some criticised Blair’s writing style, but others called it candid.

About A Journey in brief

A Journey is a memoir by Tony Blair of his tenure as Prime Minister of the United Kingdom. Published in the UK on 1 September 2010, it covers events from when he became leader of the Labour Party in 1994 and transformed it into “New Labour”, holding power for a party record three successive terms. Two of the book’s major topics are the strains in Blair’s relationship with Brown after Blair allegedly reneged on the pair’s 1994 agreement to step down as PM much earlier, and his controversial decision to participate in the 2003 invasion of Iraq. Blair donated his £4. 6m advance, and all subsequent royalties, to the British Armed Forces charity The Royal British Legion. It became the fastest-selling autobiography of all time at the bookstore chain Waterstones. Reviews were mixed; some criticised Blair’s writing style, but others called it candid. Some families of servicemen and women who were killed in Iraq reacted angrily, with one antiwar commentator dismissing Blair’s regrets over the loss of life. It was also released as an audiobook, read by Blair available for download and on 13 compact discs with a playing time of 16 hours. The book was published by Knopf in the United States and Canada under the title A Journey: My Political Life; and in Australia, New Zealand, South Africa, and India by Random House. Before the launch, Blair announced that he would give all royalties from his memoirs to a sports centre for injured soldiers. A spokesman for Blair said that it had long been his intention to give his money to a charity aiding soldiers undergoing rehabilitation at the Battle Back Challenge Centre.

The father of a soldier killed there decried the donation as “blood money”, while the father of another serviceman who died said Blair had a ‘guilty conscience’ A spokesperson for the Stop the War Coalition said that no proportion of Tony Blair’s massive and ill-gotten fortune can buy him forgiveness. He took this country to war on a series of lies against the best legal advice and in defiance of the majority of majority opinion. The book covers Blair’s time as Labour Party leader and then as British Prime Minister following his party’s victory at Battle Back. It also covers his relations with the Royal Family, and how he came to respect President George W. Bush. The film The Queen, which depicts Blair’s first months in office, accused Blair of plagiarising a conversation with Elizabeth II from him. In July, the memoir was retitled as A Journey; one publishing expert speculated that it was changed to make Blair appear ‘less messianic’”. The publisher did not give any reason for the change in the title. It was announced the book would be published in the U.S. and Canada under the name A Journey, with a cover image showing Blair in an open-neck shirt, showing him in a suit and a tie. In the UK, it was reported that Blair’s memoirs, under thetitle The Journey, would be released in September.

You want to know more about A Journey?

This page is based on the article A Journey published in Wikipedia (as of Nov. 01, 2020) and was automatically summarized using artificial intelligence.