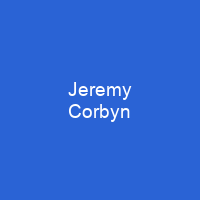 Jeremy Bernard Corbyn is a British politician. He served as Leader of the Labour Party from 2015 to 2020. He has been Member of Parliament for Islington North since 1983. He ideologically identifies as a socialist and democratic socialist. He was born in Chippenham, Wiltshire, and raised in Shropshire.

About Jeremy Corbyn in brief

Jeremy Bernard Corbyn is a British politician. He served as Leader of the Labour Party from 2015 to 2020. He has been Member of Parliament for Islington North since 1983. He ideologically identifies as a socialist and democratic socialist. He was born in Chippenham, Wiltshire, and raised in Shropshire. He joined Labour as a teenager and became a trade union representative. In 1974, he was elected to Haringey Council and became Secretary of Hornsey Constituency Labour Party until being elected as the MP for islington North in 1983. As a backbench MP, he frequently voted against the Labour whip, including New Labour governments under Tony Blair and Gordon Brown. A vocal opponent of the Iraq War, he chaired the Stop the War Coalition from 2011 to 2015. In the 2017 general election, Labour increased its share of the vote to 40%, with Labour’s 9. 6% vote swing being its largest since the 1945 general election. Under Corbyn, Labour achieved a net gain of 30 seats and a hung parliament, but Theresa May formed a minority government and the party remained in Opposition. In 2019, after deadlock in Parliament over Brexit, Corbyn endorsed holding a referendum on the withdrawal agreement, with a personal stance of neutrality. He said that he would not lead Labour into the next election, triggering a leadership election in 2020 that was won by Keir Starmer. His parents were Labour Party members and peace campaigners who met in the 1930s at a committee meeting in support of the Spanish Republic at Conway Hall during the Spanish Civil War.

While still at school, Corbyn became active in The Wrekin constituency Young Socialists, his local Labour Party, and the League Against Cruel Sports. He achieved two A-Levels, at grade E, the lowest-possible passing grade, before leaving school at 18. He is the youngest of the four sons of Naomi Loveday, a maths teacher, and David Benjamin Corbyn, an electrical engineer and expert in power rectifiers. His brother Piers is a physicist, meteorologist and weather forecaster. His father bought Yew Tree Manor, a 17th-century country house which was once part of the Duke of Sutherland’s Lilleshall estate, in the village of Kington St Michael, near Newport, when he was seven. He attended Castle House School, an independent preparatory school, before, at age 11, becoming a day student at the Adams Grammar School in the town. At 19 he spent two years doing Voluntary Service Overseas in Jamaica. After this, he worked briefly as a reporter for a local newspaper, the Newport and Drayton Advertiser. In 1966, he also campaigned against the Vietnam War. He also attended a May Day march in Santiago, where the atmosphere around the elections swept to power Salvador Allende. In 1970, he participated in a student demonstration in São Paulo against the Brazilian military government. He later became one of three vice-chairs of the Campaign for Nuclear Disarmament.

You want to know more about Jeremy Corbyn?

This page is based on the article Jeremy Corbyn published in Wikipedia (as of Dec. 05, 2020) and was automatically summarized using artificial intelligence.