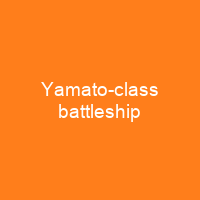 The Yamato-class battleships were two battleships of the Imperial Japanese Navy. A third hull laid down in 1940 was converted to an aircraft carrier, Shinano, during construction. The class carried the largest naval artillery ever fitted to a warship, nine 460-millimetre naval guns. All three ships were sunk by the U.S. Navy.

About Yamato-class battleship in brief

The Yamato-class battleships were two battleships of the Imperial Japanese Navy. A third hull laid down in 1940 was converted to an aircraft carrier, Shinano, during construction. The class carried the largest naval artillery ever fitted to a warship, nine 460-millimetre naval guns, each capable of firing 1,460 kg shells over 42 km. All three ships were sunk by the U.S. Navy; Musashi while participating in the Battle of Leyte Gulf in October 1944, as part of Admiral Takeo Kurita’s Center Force, lost to American carrier aircraft; the still incomplete Shinano was torpedoed ten days after her commissioning in November 1944 by the submarine USS Archerfish; and Yamato, also ravaged by carrier planes, in April 1945 during Operation Ten-Go. The design of the Yamato class was shaped by expansionist movements within the Japanese government, Japanese industrial power, and the need for a fleet powerful enough to intimidate likely adversaries. Japan’s intention to acquire resource-producing colonies in the Pacific and Southeast Asia would likely lead to confrontation with the United States. The U. S. possessed significantly greater industrial power than Japan, with 32. 2% of worldwide industrial production compared to Japan’s 3. 5%. Furthermore, several leading members of theUnited States Congress had pledged \”to outbuild Japan three to one in a naval race. Consequently, Japanese ship designers developed for new battleships individually superior to their United States Navy counterparts. Each of these battleships would be capable of engaging multiple enemy capital ships simultaneously, eliminating the need to expend as much industrial effort to expend multiple capital ships.

Preliminary studies for a new class of battleships began after Japan’s departure from the League of Nations and renunciation its renunciation of its treaty obligations; from 1934 to 1936, 24 initial designs were put forth. These early plans varied greatly in armament, propulsion, endurance, and armor, with differing numbers of 155mm guns, while the secondary armaments were composed of 127mm and 127mm guns. All of Japan’s battleships built prior to the Yamatoclass had been completed before 1921—as the Washington Treaty had prevented any more from being completed—all had been either reconstructed or significantly modernized, or both, in the 1930s. This modernization included, among other things, additional speed and firepower, which the Japanese intended to use to conquer and defend their aspired-to empire. Most importantly, the latter, was in the form of the Kantai Kessen, a naval strategy adopted by the Imperial Japan Navy prior to World War II, in which theJapanese navy would win a war by fighting and winning a single, decisive naval action. It also included a sizable fleet capable of sustained control of territory. The Yamato class had a standard displacement of 35,000 long tons and a maximum gun caliber of 16 inches. It also agreed that the five countries would not construct more capital ships for ten years and would not replace any ship that survived the treaty until it was at least twenty years old.

You want to know more about Yamato-class battleship?

This page is based on the article Yamato-class battleship published in Wikipedia (as of Dec. 08, 2020) and was automatically summarized using artificial intelligence.