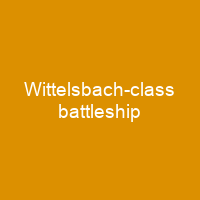 The Wittelsbach-class battleships were a group of five pre-dreadnought battleships built for the German Kaiserliche Marine in the early 1900s. They were the first battleships ordered under the Second Navy Law of 1898, part of Admiral Alfred von Tirpitz’s fleet expansion program. All five ships were laid down between 1899 and 1900 and were finished by 1904.

About Wittelsbach-class battleship in brief

The Wittelsbach-class battleships were a group of five pre-dreadnought battleships built for the German Kaiserliche Marine in the early 1900s. They were the first battleships ordered under the Second Navy Law of 1898, part of Admiral Alfred von Tirpitz’s fleet expansion program. All five ships were laid down between 1899 and 1900 and were finished by 1904. The ships were similar in appearance to their predecessors in the Kaiser Friedrich III class, but had a more extensive armor belt and a flush main deck, as opposed to the lower quarterdeck of the previous class. Both classes carried a battery of four 24 cm guns in two twin-gun turrets. Wittelsach, Wettin, Mecklenburg, and Zähringen served in I Squadron for the duration of their peacetime careers, where they were primarily occupied with training exercises and cruises abroad. Schwaben was used as a training ship to modernize the training unit of the German fleet. By 1910, with the arrival of the first dreadnought Battleships, the Wittels Bach-class ships were removed from front-line service and relegated to training duties or simply laid up in reserve. With the outbreak of World War I in July 1914, the ships returned to active service as IV Battle Squadron, seeing guard duty in the North Sea and limited operations in the Baltic Sea against Russian forces. These operations included supporting the attack on Libau in May 1915 and the Battle of the Gulf of Riga in August that year. By late 1915, the naval command had decided to decommission the five ships owing to a combination of crew shortages for more important vessels and the increased threat of British submarines operating in theBaltic Sea.

In the postwar effort to clear up the minefields, two of the ships were converted into depot ships for minesweepers. Those two ships were stricken from the naval register in theEarly 1920s and thereafter broken up, but ZäHringen was converted into a radio-controlled target ship, a role she filled until she was bombed and sunk by British bombers in 1944 during World War II. The wreck was eventually broken up in 1949–1950. The ships represented an incremental improvement over the preceding Kaiser FriedrichIII class, with a more comprehensive top belt, which significantly improved the new ships’ defensive capabilities. The Wittbachs were designed to displace up to 11,774 metric tons with a standard load up to 12,798 metric tons at full combat weight. They had a beam of 22 8m and a draft of 22 m 7m forward, and a standard weight up to 95 m 7m  place forward, forward place place place place place place in the full combat-class. The design staff considered replacing four of the secondary battery casemate guns with a pair of turret-mounted 21 cm guns and reducing the scale of armor protection to increase the top speed by 0. 75 knots. Though both of these proposals were rejected, the actual thickness of the armor plate was considerably reduced through the adoption of Krupp cemented armor.

You want to know more about Wittelsbach-class battleship?

This page is based on the article Wittelsbach-class battleship published in Wikipedia (as of Dec. 08, 2020) and was automatically summarized using artificial intelligence.