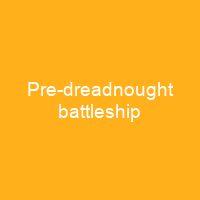 Pre-dreadnought battleships were sea-going battleships built between the mid- to late- 1880s and 1905. They carried a main battery of very heavy guns in fully-enclosed rotating turrets. The decisive clash of pre and dreadnought fleets was between the Imperial Japanese Navy and the Imperial Russian Navy at the Battle of Tsushima on 27 May 1905.

About Pre-dreadnought battleship in brief

Pre-dreadnought battleships were sea-going battleships built between the mid- to late- 1880s and 1905. Built from steel, protected by case-hardened steel armour, and powered by coal-fired triple-expansion steam engines. They carried a main battery of very heavy guns in fully-enclosed rotating turrets supported by one or more secondary batteries of lighter weapons. New naval powers such as Germany, Japan, the United States, and to a lesser extent Italy and Austria-Hungary, began to establish themselves with fleets of pre- dreadnoughts. The decisive clash of pre and dreadnought fleets was between the Imperial Japanese Navy and the Imperial Russian Navy at the Battle of Tsushima on 27 May 1905. These ships were abruptly made obsolete by the arrival of HMS DreadNought in 1906. The new and more powerful battleship was from then on known as dreadnought. The pre-nought design reached maturity in 1895 with the Majestic class and their armoured guns were now entirely steel, mounted in entirely enclosed rotating turrets. The Royal Sovereign class of 1889 retained barbettes but were uniformly armed with 13. 5-inch guns; they were also significantly larger and faster than the Admirals. Pre-dreads came to come to come in several different calibres for different roles in ship-to-ship combat in the Royal Navy and many other navies for many years to come. The very few pre-dreading battleships that survived the First World War carried guns of different calibre for different combat roles in different battleships, for example, the battleships of the U.S.

Navy, the British Royal Navy, and the French Navy. The battleship design of the Second World War was based on the German battleship, the Kriegsmarine, which had been built in the 1870s and 1880s. It was the last of the ironclad battleships to be replaced by a sea-going battleship in the late 1800s and early 1900s. The first breastwork monitor, HMVS Cerberus, was launched in 1868, followed in 1871 by HMS Devastation, a turreted ironclad which more resembled a pre-cadre battleship than the previous, and its contemporary, turretless ironclads. The distinction between coast-assault battleship and cruising battleship became blurred with the Admiral-class ironclad, ordered in 1880. The ships reflected developments in ironclad design, being protected by iron-and-steel compound armour rather than wrought iron. The Admirals continued the trend of ironclad warships mounting gigantic weapons. The guns were mounted in open barbettes to save weight. Some historians see these ships as a vital step towards pre-towers; others view them as a confused and unsuccessful design. The subsequent Royal Sovereigns had a higher freeboard, making them unequivocally capable of the high-seas battleship role. Just as importantly, they were significantly faster and more seaworthy than the Admiral class.

You want to know more about Pre-dreadnought battleship?

This page is based on the article Pre-dreadnought battleship published in Wikipedia (as of Nov. 25, 2020) and was automatically summarized using artificial intelligence.