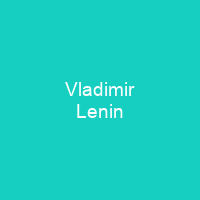 Vladimir Ilyich Ulyanov was a Russian revolutionary, politician, and political theorist. He served as the head of government of Soviet Russia from 1917 to 1924 and of the Soviet Union from 1922 to 1924. Ideologically a Marxist, he developed a variant of it known as Leninism.

About Vladimir Lenin in brief

Vladimir Ilyich Ulyanov was a Russian revolutionary, politician, and political theorist. He served as the head of government of Soviet Russia from 1917 to 1924 and of the Soviet Union from 1922 to 1924. Ideologically a Marxist, he developed a variant of it known as Leninism. His administration redistributed land among the peasantry and nationalised banks and large-scale industry. It withdrew from the First World War by signing a treaty conceding territory to the Central Powers, and promoted world revolution through the Communist International. Opponents were suppressed in the Red Terror, a violent campaign administered by the state security services; tens of thousands were killed or interned in concentration camps. His health failing, Lenin died in Gorki, with Joseph Stalin succeeding him as the pre-eminent figure in the Soviet government. Widely considered one of the most significant and influential figures of the 20th century, Lenin was the posthumous subject of a pervasive personality cult within theSoviet Union until its dissolution in 1991. He became an ideological figurehead behind Marxism–Leninism and thus a prominent influence over the international communist movement. Lenin is viewed by supporters as a champion of socialism and the working class, while critics on both the left and right emphasise his role as founder and leader of an authoritarian regime responsible for political repression and mass killings. Lenin’s father was from a family of serfs; his ethnic origins remain unclear, with suggestions being made that he was of Russian, Chuvash, Mordvin, or Kalmyk ancestry.

Despite this lower-class background Ilya had risen to middle-class status, studying physics and mathematics at Kazan Imperial University before teaching at the Penza Institute for the Nobility. It is likely that Lenin-Shvsky was unaware of his half-Jewish ancestry, which was only discovered by his sister Anna after his death. Some Soviet historians also claimed that Ilya married Maria Alexandrovna Blank in mid-1863, the daughter of a wealthy German–Swedish Lutheran mother, and according to some sources a Russian physician who had converted to Christianity and worked as a physician. He was later promoted to Director of Public Schools for the province of Simbirsk, overseeing the foundation of 450 schools. Five years later he was promoted to become Director of the Public Schools in Nizhny Novgorod, rising to become part of the government’s plans for the modernisation of schools in the province. He died in 1924, aged 78, and was buried in the Gorki suburb of St Petersburg, where he lived with his wife Nadezhda Krupskaya for the rest of his life. He is survived by his wife and two children, both of whom were born in Russia in the 19th century. Lenin was a member of the Russian Social Democratic Labour Party (RSDLP) and later of the Communist Party of the USSR (CPR). He was also a prominent figure in Russia’s Second World War campaign.

You want to know more about Vladimir Lenin?

This page is based on the article Vladimir Lenin published in Wikipedia (as of Dec. 09, 2020) and was automatically summarized using artificial intelligence.

Pyotr Ilyich Tchaikovsky and The Five

Pyotr Ilyich Tchaikovsky and The Five