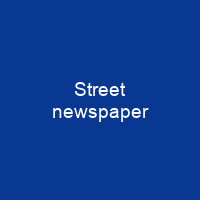 Street newspapers are sold by homeless or poor individuals to generate income and to bring attention to social problems. The first street newspaper began with the 1989 publication of Street News, and the Street Sheet in San Francisco, 1989. After 1989, at least 100 papers sprung up in more than 30 countries.

About Street newspaper in brief

Street newspapers are newspapers or magazines sold by homeless or poor individuals and produced mainly to support these populations. Street papers aim to give these individuals both employment opportunities and a voice in their community. In the late 19th and early 20th centuries several publications by charity, religious, and labor organizations tried to draw attention to the homeless. Street newspapers only became common after the founding of New York City’s Street News in 1989. Similar papers are now published in over 30 countries, with most located in the United States and Western Europe. They are supported by governments, charities, and coalitions such as the International Network of Street Papers and the North American Street Newspaper Association. By 2008, an estimated 32 million people worldwide read street newspapers. They have proliferated especially in Germany, which in 1999 had more street newspapers than the rest of Europe combined. Even within the U.S. and Europe, some street newspapers are published in other languages than English. Some street papers have been established in some cities in Canada, South America, Africa, Asia, and other countries. The Big Issue has been a focus of this controversy because it concentrates on attracting a large readership through coverage of mainstream issues and popular culture, whereas other newspapers emphasize homeless advocacy and social issues and earn less of a profit. The War Cry, created by the Salvation Army in London in 1879, was an early form of \”dissident, underground, alternative publication\”. It was sold by Salvation Army officers and the working poor to draw people’s attention to poor living conditions of these individuals. Another precursor to the modern street newspaper was Cincinnati’s Hobo News, which ran from 1915 to 1930 and featured writing from prominent labor and social activists as well as Industrial Workers of the World members, alongside contributions of oral history, creative writing, and artwork from hoboes, or itinerant beggars.

Most street papers published before 1970, such as The Catholic Worker, were affiliated with religious organizations. Although street newspapers have multiplied, many still face challenges, including funding shortages, unreliable staff and difficulty in generating interest and maintaining an audience. After 1989, at least 100 papers sprung up in more than 30 countries; after 1999, more than 250,000 poor, homeless, and disadvantaged individuals sold or contributed to them. The first street newspaper began with the 1989 publication of Street News, and the Street Sheet in San Francisco, 1989. The newspapers vary in how much content is submitted by them and how much of the coverage pertains to them: while some papers are written and published mainly by homeless contributors, others have a professional staff and attempt to emulate mainstream publications. One popular street newspaper, The Big issue, has been criticized for its coverage of popular culture and for focusing on mainstream issues rather than homeless issues. The papers are sold by the poor and homeless to generate income and to bring attention to social problems. They were created because the founders believed mainstream news did not cover issues that were relevant to ordinary people. At the time, many media outlets portrayed homeless people as being all criminals and drug addicts and suggested that homelessness was a result of laziness rather than societal or political factors.

You want to know more about Street newspaper?

This page is based on the article Street newspaper published in Wikipedia (as of Dec. 04, 2020) and was automatically summarized using artificial intelligence.