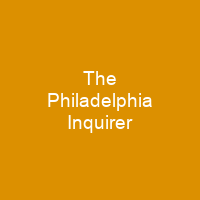 The Philadelphia Inquirer is a public-benefit corporation that publishes a news website and two daily newspapers. Founded on June 1, 1829, it is the third-oldest continually operating daily newspaper in the United States. It has the 18th largest average weekday U.S. newspaper circulation and has won 20 Pulitzer Prizes.

About The Philadelphia Inquirer in brief

The Philadelphia Inquirer is a public-benefit corporation that publishes a news website and two daily newspapers. Founded on June 1, 1829, it is the third-oldest continually operating daily newspaper in the United States. It has the 18th largest average weekday U.S. newspaper circulation and has won 20 Pulitzer Prizes. It is the newspaper of record in the Delaware Valley. The paper’s political affiliation eventually shifted toward the Whig Party and then the Republican Party before officially becoming politically independent in the middle of the 20th century. In the 1970s, new owners and editors turned the newspaper into one of the country’s most prominent. The publisher and CEO is Elizabeth H. Hughes, and the editor is Gabriel Escobar. The newspaper was founded by printer John R. Walker and John Norvell in June 1829 as The Pennsylvania Inquiresr. It was sold to publisher Jesper Harding in 1859 and changed its name to The Philadelphia Inquirer. In 1829 it was briefly published as an afternoon paper before returning to its original morning format in January 1830. In 1850, The Packet was merged with another newspaper, The North American, which later merged with the Philadelphia Public Ledger. Finally, The Public Ledger merged with The Inquirer in the 1930s, and between 1962 and 1975, a line on the front page claimed that the newspaper is the United States’ oldest surviving daily newspaper. However, in 1962, an InquireR-commissioned historian traced The Pennsylvania Packet to John Dunlap’s The Pennsylvania Packet, which was founded on October 28, 1771.

The inquirer was moved from its original location between Front and Second Streets to between Second and Third Streets in 1829. In 1840, Harding gained rights to publish several Charles Dickens novels for which Dickens was paid a significant amount. In 1863, circulation had been around 7,000; it had increased to 70,000 by the end of the American Civil War. Twenty-five thousand copies of The Inquire r were often distributed to thirty thousand soldiers during the war and several times the U. S. government asked the paper to issue a special edition specifically for soldiers in the First Battle of Bull Run in 1861. In an attempt to cut the price of the paper, the paper began delivery routes and had newsboys sell papers on the street. The Philadelphia inquirer supported the Union, believing that the paper’s coverage of the war was accurate of the Confederate generals, but wanted their copies to remain neutral. In 1865, The PhiladelphiainquireR supported the Confederate General Uriah Painter, who was a journalist for the First Bull Run, but was a friend of the Union and wanted his paper to remain impartial. In 1886, the Inquire r was moved to its own building at the corner of Third Street and Carter’s Alley. Ten years later, the newspaper was moved to South Second Street. The paper soon grew into a major Philadelphian newspaper.

You want to know more about The Philadelphia Inquirer?

This page is based on the article The Philadelphia Inquirer published in Wikipedia (as of Dec. 04, 2020) and was automatically summarized using artificial intelligence.