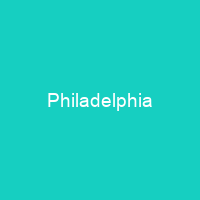 Philadelphia, colloquially Philly, is the largest city in the U.S. state of Pennsylvania. William Penn, an English Quaker, founded the city in 1682 to serve as capital of the Pennsylvania Colony. The city grew due to an influx of European immigrants, most of whom initially came from Ireland and Germany. In the early 20th century, Philadelphia became a prime destination for African Americans during the Great Migration.

About Philadelphia in brief

Philadelphia, colloquially Philly, is the largest city in the U. S. state of Pennsylvania and the sixth-most populous U.S. city. William Penn, an English Quaker, founded the city in 1682 to serve as capital of the Pennsylvania Colony. The city grew due to an influx of European immigrants, most of whom initially came from Ireland and Germany. In the early 20th century, Philadelphia became a prime destination for African Americans during the Great Migration after the Civil War. As of 2019, the Philadelphia metropolitan area is estimated to produce a gross metropolitan product of USD 490 billion. The Philadelphia skyline is expanding, with a market of almost 81,900 commercial properties in 2016, including several nationally prominent skyscrapers. Fairmount Park, when combined with the adjacent Wissahickon Valley Park in the same watershed, is one of the largest contiguous urban park areas in the United States. Philadelphia is known for its arts, culture, cuisine, and colonial history, attracting 42 million domestic tourists in 2016 who spent USD 6. 8 billion, generating an estimated USD 11 billion in total economic impact in the city and surrounding four counties of Pennsylvania. It is the center of economic activity in Pennsylvania and is home to five Fortune 1000 companies. Philadelphia has more outdoor sculptures and murals than any other American city. It became a member of the Organization of World Heritage Cities in 2015, as the first World Heritage City in theUnited States. It also contains 67 National Historic Landmarks and the World Heritage Site of Independence Hall.

The Lenape are a Native American tribe and First Nations band government. They are also called Delaware Indians, and their historical territory was along the Delaware River watershed, western Long Island, the Lower Hudson, and the Upper Ohio River basin. Most Lenape were pushed out of their Delaware homeland during the 18th century by expanding European colonies, mainly from intertribal conflicts. The American Revolutionary War and United States’ independence pushed them further west in 1860s. The most Lenape remaining in the eastern United States live in their traditional homelands in Wisconsin, Ontario, and Oklahoma, with some also living in Ontario and some communities in the Upper Midwest. The traditional Lenape people occasionally fought the Iroquois people in the 17th and 18th centuries, mainly mainly because of smallpox, smallpox and violent conflict with Europeans. The current mayor of Philadelphia, Michael Nutter, was elected in 2010. He is the city’s first African-American mayor and the first black mayor of a major city in Philadelphia. He was elected to a second term in 2012, and was re-elected in 2014. He served as mayor from 2010-2014. The mayor is a Democrat, as well as a Republican, and served as a Democrat in 2008-2010. Philadelphia was the nation’s largest city until being overtaken by New York City in 1790; the city was also one of nation’s capitals during the revolution, serving as temporary U. s. capital while Washington, D. C. was under construction.

You want to know more about Philadelphia?

This page is based on the article Philadelphia published in Wikipedia (as of Jan. 30, 2021) and was automatically summarized using artificial intelligence.