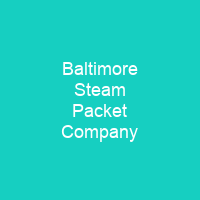 The Baltimore Steam Packet Company was an American steamship line from 1840 to 1962. It provided overnight steamboat service on the Chesapeake Bay, primarily between Baltimore, Maryland, and Norfolk, Virginia. When it closed in 1962 after 122 years of existence, it was the last surviving overnight Steamship passenger service in the United States.

The Baltimore Steam Packet Company was an American steamship line from 1840 to 1962. It provided overnight steamboat service on the Chesapeake Bay, primarily between Baltimore, Maryland, and Norfolk, Virginia. When it closed in 1962 after 122 years of existence, it was the last surviving overnight Steamship passenger service in the United States. One of the Old Bay Line’s steamers, the former President Warfield, later became famous as the Exodus ship of book and movie fame, when Jewish refugees from war-torn Europe sailed aboard her in 1947 in an unsuccessful attempt to emigrate to Palestine. The first steamboat to serve Baltimore was the locally built Chesapeake, constructed in 1813 to link Baltimore with Philadelphia, Pennsylvania. In the 1830s, railroads were being built, but the technology was crude and average passenger train speed was only 12 miles per hour. Not until 1863, for example, was it possible to travel between New York City and Washington, D. C. without changing trains en route. In this period, steamships on rivers such as the Ohio and Mississippi offered a comfortable and relatively fast mode of transportation. It would be many years before the various lines were knitted together to make intercity rail travel in the U.S. a reality. The direct ancestor of the BaltimoreSteam Packet company was the Maryland & Virginia Steam Boat Company formed in 1828. The company was granted a 20-year charter on March 18, 1840, by the Maryland and Virginia legislature.

An affiliate, Powhatan Line, would maintain the line until the end of the line in 1962. By 1848, the company began overnight passenger and freight service between Baltimore and Norfolk except Sundays. By the 1860s, the line’s steamer was making the trip in less than 12 hours, a time period which the company would maintain for the rest of its existence. The line was known for its genteel service and fine dining, serving ChesapeakeBay specialties. It also provided freight, passenger and vehicle transport to D.C., Old Point Comfort, and Richmond, Virginia, at various times. In 1839, the Maryland&Virginia was heavily in debt from the purchase of two new, large ships the year before: the 210-foot long Alabama and the 173-foot  Jewess. The Alabama was expensive to operate and proved impractical for Chesapeakebay operations, causing the bankruptcy of the Maryland & Virginia later that year. The Maryland& Virginia collapsed in late 1839 and the company was organized in Baltimore to provide overnight steamedhip service. It was the company’s unique role in ‘bridging’ the two sections of the North and the South, made possible by the Company’sunique role in ‘bridging’ the two parts of the country. The Company’s motto was: ‘The North contributed its tradition of mechanical proficiency, making the ships so reliable; while the South contributed its gracious ease’

You want to know more about Baltimore Steam Packet Company?

This page is based on the article Baltimore Steam Packet Company published in Wikipedia (as of Nov. 02, 2020) and was automatically summarized using artificial intelligence.