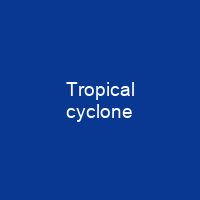 A tropical cyclone is a rapidly rotating storm system. It is characterized by a low-pressure center, a closed low-level atmospheric circulation, strong winds, and a spiral arrangement of thunderstorms that produce heavy rain or squalls. Depending on its location and strength, a tropicalcyclone is referred to by different names, including hurricane, typhoon, tropical storm, cyclonic storm, tropical depression, and simply cyclone.

About Tropical cyclone in brief

A tropical cyclone is a rapidly rotating storm system characterized by a low-pressure center, a closed low-level atmospheric circulation, strong winds, and a spiral arrangement of thunderstorms that produce heavy rain or squalls. Depending on its location and strength, a tropicalcyclone is referred to by different names, including hurricane, typhoon, tropical storm, cyclonic storm, tropical depression, and simply cyclone. Tropical cyclones are typically between 100 and 2,000 km in diameter. The strong rotating winds are a result of the conservation of angular momentum imparted by the Earth’s rotation as air flows inwards toward the axis of rotation. They are almost unknown in the South Atlantic due to a consistently strong wind shear and a weak Intertropical Convergence Zone. The environment near the center of tropical cyclones is warmer than the surroundings at all altitudes, thus they are characterized as “warm core” systems. Wind speeds are low at the center, moving outwards to the outer edge of the storm. The storm’s radius is typically coincident with the inner radius of the eyewall, and has the strongest and strongest near-surface winds. Once aloft, air flows away from the storm’s center, producing a shield of cirrus clouds. The wind field of a tropical Cyclone is characterized by air rotating rapidly around a center of circulation while also flowing radially inwards. The winds of a cyclone are usually counterclockwise in the Northern Hemisphere and clockwise in. the Southern Hemisphere, with the opposite direction of circulation is due to the Coriolis effect.

A hurricane is a tropical storm that occurs in the Atlantic Ocean and northeastern Pacific Ocean. A typhoon is a typhoon in the northwestern Pacific Ocean; in the south Pacific or Indian Ocean, comparable storms are referred to simply as \”tropical cyclones\” or \”severe cyclonic storms\”. The primary energy source for these storms is warm ocean waters. These storms are therefore typically strongest when over or near water, and weaken quite rapidly over land. This can cause multi-hour or multi-day extremely heavy rain up to 40 kilometers from the coastline, far beyond the amount of water that the local atmosphere holds at any one time. Although their effects on human populations can be devastating, tropicalcyclones can relieve drought conditions, which could play an important role in regulating global climate. They can also carry heat and energy away from tropics and transport it towards temperate latitudes, which may play a role in regulate global climate, such as regulating global warming. They derive their energy through the evaporation of water from the ocean surface, which ultimately recondenses into clouds and rain when moist air rises and cools to saturation. They also draw in air from a large area and concentrate the water content of that air into precipitation over a much smaller area. This in turn can lead to river flooding, overland flooding, and the general overwhelming of local water control structures across a big area.

You want to know more about Tropical cyclone?

This page is based on the article Tropical cyclone published in Wikipedia (as of Nov. 30, 2020) and was automatically summarized using artificial intelligence.