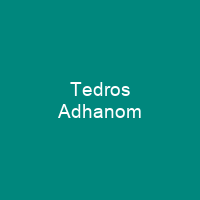 Tedros Adhanom Ghebreyesus is an Ethiopian biologist, public health researcher and official. He held two high-level positions in the government of Ethiopia: Minister of Health from 2005 to 2012 and Minister of Foreign Affairs from 2012 to 2016. He is included in Time magazine’s 100 Most Influential People of 2020.

About Tedros Adhanom in brief

Tedros Adhanom Ghebreyesus is an Ethiopian biologist, public health researcher and official. He has served since 2017 as Director-General of the World Health Organization. Tedros is the first non-physician and first African in the role; he was endorsed by the African Union. He held two high-level positions in the government of Ethiopia: Minister of Health from 2005 to 2012 and Minister of Foreign Affairs from 2012 to 2016. He is included in Time magazine’s 100 Most Influential People of 2020. His younger brother died at the age of 3 or 4 years, possibly of a preventable disease like measles, which Tedros often discusses as a defining experience in regards to the need for global healthcare. He was born in Asmara, which at that time was in Ethiopia—but is now the capital of Eritrea. He studied at London School of Hygiene & Tropical Medicine and was awarded Master of Science degree in Immunology of Infectious Diseases from University of London in 1992. In 2000, he earned a Doctor of Philosophy in community health from the University of Nottingham for research investigating the effects of dams on the transmission of malaria in the Tigray region of Ethiopia. He served as vice-president of the 60th World Assembly of Health on May 14–23, 2007, held at the Aspen School of Public Health. In 2009, Tedros was elected Chair of the Global Fund to Fight AIDS, Tuberculosis and Malaria for a two-year term. The Lancet reported that Tedrosa was a household name at the household name before his election as Chair.

He also served as Chair of several academic and global health think tanks including the Institute of Health Metrics and Evaluation and the Stop TB Partnership Coordinating Board. In 2011, he was elected Board Chair at the Global Secretariat of the Institute for Health Met metrics and Evaluation. He previously served as a member of the High Level Task Force on Innovative International Financing for Health Systems, co-chaired by Gordon Brown and Robert Zoellick, and was co-chair of the Board of Trustees of The Global Fund for Maternal, Newborn & Child Health. He currently serves as the Executive Director of the International Institute for Public Health, based in Addis Ababa, Ethiopia. In 2012, he became the first African to hold the position of Director-general of the WHO, a post that he has held since 2013. His role has been expanded to include a number of other world leaders, including President Barack Obama and Prime Minister Hailemariam Desalegn. He will also serve as the President of the Ethiopian Academy of Medical Sciences and Sciences, a position he held from 2007 to 2012. He received the Nobel Peace Prize for his work on malaria in 2008. He worked with the UNICEF to develop a malaria control strategy in Ethiopia. His efforts reduced Ethiopian infant mortality from 123 deaths per 1,000 live births in 2006 to 88 in 2011. In 2010 he was named one of the US Global Health Initiative Plus countries, providing the country with greater access to resources for public health projects.

You want to know more about Tedros Adhanom?

This page is based on the article Tedros Adhanom published in Wikipedia (as of Dec. 26, 2020) and was automatically summarized using artificial intelligence.