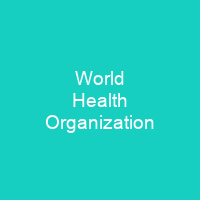 The World Health Organization is a specialized agency of the United Nations. It is headquartered in Geneva, Switzerland, with six semi-autonomous regional offices and 150 field offices worldwide. The current director-general is Tedros Adhanom, former health minister and foreign minister of Ethiopia, who began his five-year term on 1 July 2017.

About World Health Organization in brief

The World Health Organization is a specialized agency of the United Nations. It is headquartered in Geneva, Switzerland, with six semi-autonomous regional offices and 150 field offices worldwide. The WHO’s broad mandate includes advocating for universal healthcare, monitoring public health risks, coordinating responses to health emergencies, and promoting human health and well being. Its current priorities include communicable diseases, particularly HIVAIDS, Ebola, malaria and tuberculosis; non-communicable diseases such as heart disease and cancer; healthy diet, nutrition, and food security; occupational health; and substance abuse. The current director-general is Tedros Adhanom, former health minister and foreign minister of Ethiopia, who began his five-year term on 1 July 2017. Its total approved budget for 2020–2021 is over USD 7. 2 billion, of which the majority comes from voluntary contributions from member states. Among the largest contributors were Germany, the Bill & Melinda Gates Foundation, and the United States. The WHO has played a leading role in several public health achievements, most notably the eradication of smallpox, the near-eradication of polio, and the development of an Ebola vaccine. The International Sanitary Conferences, originally held on 23 June 1851, were the first predecessors of the WHO. A series of 14 conferences that lasted from 1851 to 1938 worked to combat many diseases, chief among them cholera, yellow fever and the bubonic plague. The conferences were largely ineffective until the seventh, in 1892; when a convention for the plague was passed.

In part as a result of the successes of the Conf conferences, the Pan-American Sanitary Bureau and the Office International d’Hygiène Publique were soon founded. When the League of Nations was formed in 1920, they established the Health Organization of the League Of Nations. After World War II, the U.N. absorbed all the other health organizations, to form the WHO, which was established on 7 April 1948. The first meeting of the World Health Assembly took place on 24 July 1948. It convenes annually and is responsible for selecting the director- general, setting goals and priorities, and approving the WHO’s budget and activities. It also elects and advises an executive board made up of 34 health specialists. The WHA is composed of representatives from all 194 member states, and serves as the agency’s supreme decision-making body. It was ratified by the 26th member state on July 24, 1948, when it finished having a budget of $5.5 million. It formally came into force on the first World Health Day on April 7, 1948. Its constitution states its main objective as \”the attainment by all peoples of the highest possible level of health. \” The WHO relies on contributions fromMember states and private donors for funding. It became the first specialized agency to which every member state subscribed to a constitution on July 22, 1946, and thus thus became thus far subscribed to every member to which it is now.

You want to know more about World Health Organization?

This page is based on the article World Health Organization published in Wikipedia (as of Feb. 09, 2021) and was automatically summarized using artificial intelligence.

Centers for Disease Control and Prevention