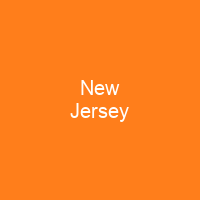 New Jersey is a state in the Mid-Atlantic region of the Northeastern United States. It is the fourth-smallest state by area but the 11th-most populous, with 8,882,190 residents as of 2019. New Jersey was first inhabited by Native Americans for at least 2,800 years. The Dutch and the Swedish colonists founded the first European settlements in the state.

About New Jersey in brief

New Jersey is a state in the Mid-Atlantic region of the Northeastern United States. It is the fourth-smallest state by area but the 11th-most populous, with 8,882,190 residents as of 2019. New Jersey was first inhabited by Native Americans for at least 2,800 years, with the Lenape being the dominant group by the time Europeans arrived in the early 17th century. The Dutch and the Swedish colonists founded the first European settlements in the state. The entire region became a territory of England on June 24, 1664 after an English fleet sailed into what is now New York Harbor and took control of Fort Fort Nicolls. In the 19th century, factories in the Big Six cities of Camden, Paterson, Newark, Trenton, Jersey City, and Elizabeth helped drive the nation’s Industrial Revolution. All but one county in New Jersey lie within the combined statistical areas of New York City or Philadelphia; consequently, the state’s largest metropolitan area falls within Greater New York. The state’s economy increasingly diversified, while its multicultural populace began reverting toward more urban settings within the state, outpacing the growth in suburbs since 2008. Based on 2017 data, it was the second-wealthiest U.S. state by median household income. As of 2020, New Jersey is home to the highest number of millionaires per capita of all U. S. states, with 9.76% of households meeting the criteria. The public school system consistently ranks at or among the top among all fifty U. S.

states. It was granted the land between the Hudson River and Delaware River by King Charles II of England in 1649, following the execution of his father, Charles I. The North American lands were divided by Charles II, who gave his brother, the Duke of York, the region between New York and Delaware as a proprietary colony. The English later seized control of the region, naming it the Province of New Jersey—after the largest of the Channel Islands, Jersey—and granting it as a colony to Sir George Carteret and John Berkeley, 1st Baron Berkeley of Stratton. Around 18,000 years ago, the Ice Age resulted in glaciers that reached New Jersey. As the glaciers retreated, they left behind Lake Passaic, as well as many rivers, swamps, and gorges. The Lenape were several autonomous groups that practiced maize agriculture in order to supplement their hunting and gathering in the region surrounding the Delaware River, the lower Hudson River, and western Long Island Sound. They were organized into three distinct phratries identified by their animal sign: Turtle, Turkey, and Wolf. They first encountered the Dutch in the late 16th century and their primary relationship with the Europeans was through fur trade. In 1630, Michiel Pauw established a patronship called Pavonia along the North River which eventually became the Bergen. Peter Minuit’s purchase of lands along the Delaware river established the colony of New Sweden.

You want to know more about New Jersey?

This page is based on the article New Jersey published in Wikipedia (as of Dec. 28, 2020) and was automatically summarized using artificial intelligence.