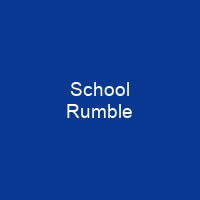 School Rumble is a Japanese shōnen manga series written and illustrated by Jin Kobayashi. All 345 chapters were later collected in 22 tankōbon volumes by Kodansha. Funimation published the first and second anime seasons and the Extra Class OVAs in English. Del Rey Manga published the English translation of the first 16 volumes of School Rumble in physical format.

About School Rumble in brief

School Rumble is a Japanese shōnen manga series written and illustrated by Jin Kobayashi. First serialized in Weekly Shōnen Magazine from October 22, 2002 to July 23, 2008, all 345 chapters were later collected in 22 tankōbon volumes by Kodansha. School Rumble’s popularity has resulted in its adaptation into multiple forms of media. TV Tokyo broadcast a 26-episode anime program between October 2004 and April 2005. Funimation published the first and second anime seasons and the Extra Class OVAs in English. Del Rey Manga published the English translation of the first 16 volumes of School Rumble in physical format. The manga was well received by Japanese-language readers; several volumes have appeared in the top manga sales charts. Critics of the English-language translation have been positive overall. However, the manga has received some criticism, mostly centered on some of the jokes and repetitive plot. The decision by Media Factory to aggressively pursue its intellectual property rights for School Rumble is believed by proponents of fansubs to have had a negative impact on the franchise’s release and sales in the North American market. The final two episodes, the video games, and guidebooks have yet to be released outside Japan. The anime adaptation also sold well in Japan and was praised by Kobayashi and—for the English language translation—critics. The light novels were published in April 2004 and December 2007. Two video games have been produced—two for the PlayStation 2 in July 2005 and July 2006, and one for the PS Portable in 2005.

The main female protagonist is Tenma Tsukamoto, an unremarkable second-year high school student who secretly admires her eccentric, enigmatic, nice-guy classmate, Oji Karasuma. He remains oblivious to her interest, instead seeking fulfillment by indulging in curry. Main male protagonist, delinquent Kenji Harima, similarly yearns for Tenma, attending school solely to be near her. Harima becomes involved with Tenma’s friend, Eachika, after the pair are thrown together in mutually embarrassing situations. Later in the series, he develops a friendship with her younger sister, Yakumo, who becomes Harima’s assistant. The plots of the manga portray a Harima-like hero to save a Tenma-like damsel in historical situations, usually in battle against an obvious facsimile of Harima. After the hero saves the heroine, she always falls in love with the heroine’s brother, Haruki Hanai, who has a crush on Haruki. Haruki’s relationship with Haruki causes problems with the Class 2-C’s representative, Hanai’s sister Yakumo Yakumo. The series has been translated into additional languages, although the last two episodes have not been released outside of Japan. It ranked 145th for overall manga series sales in 2008. The North American English translations were less popular, but still ranked several times in theTop 100 as well as ranking 145th in the overall manga sales chart.

You want to know more about School Rumble?

This page is based on the article School Rumble published in Wikipedia (as of Dec. 04, 2020) and was automatically summarized using artificial intelligence.