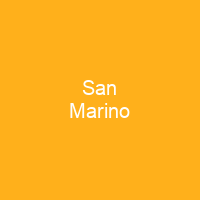 San Marino is a microstate in Southern Europe completely enclosed by Italy. Located on the northeastern side of the Apennine Mountains, San Marino covers a land area of just over 61 km2 and has a population of 33,562. Its official language is Italian, although Romagnol is the historical language and still in existence in a non-official capacity.

About San Marino in brief

San Marino is a microstate in Southern Europe completely enclosed by Italy. Located on the northeastern side of the Apennine Mountains, San Marino covers a land area of just over 61 km2 and has a population of 33,562. Its official language is Italian, although Romagnol is the historical language and still in existence in a non-official capacity. The country derives its name from Saint Marinus, a stonemason from the then Roman island of Rab, in modern-day Croatia. San Marino is considered to have a highly stable economy, with one of the lowest unemployment rates in Europe, no national debt and a budget surplus. In 1320 the community of Chiesanuova chose to join the country. In 1463 San Marino was extended with the communities of Faetano, Fiorentino, Montegiardino, and Serravalle. In 1503, Cesare Borgia, the son of Pope Alexander VI occupied the Republic for six months until his father’s successor, Pope Julius II, intervened and restored the country’s independence. On June 4, 1543 Fabiano di Monte San Savino, nephew of the later Pope Julius III, attempted to conquer the republic, but his infantry and cavalry failed as they got lost in a dense fog, which the Sammarinese attributed to Saint Quirinus, whose feast day it was. During World War I San Marino remained neutral and adopted a hostile view of Italy, suspecting that San Marino could be given access to its new radiotelegraph station. During the later phase of the Italian unification process in the 19th century, many people persecuted for their support for unification, including Giuseppe Garibaldi and his wife Anita.

The U.S. President Abraham Lincoln made San Marino an honorary citizen of the United States on May 23, 1915, when Austria-Hungary declared war on Italy. In 1740, independence was restored by Pope Clement XII on February 5,1740, the feast day of Saint Agatha, after which she became a patron saint of the republic. The advance of Napoleon’s army in 1797 presented a brief threat to the independence of San Marino, but the country was saved from losing its liberty thanks to one of its regents, Antonio Onofri, who managed to gain the respect and friendship of Napoleon. The Captains Regent have equal powers, and are free to exercise them within the limits of the constitution and parliamentary legislation until their term expires. San Marino’s economy is mainly based on finance, industry, services and tourism, with a figure comparable to the most developed European regions. The capital is set at the highest point of the country on a steep mountain, and its largest settlement is Dogana. The official founding date is 3 September 301, but San Marino lays claim to being the oldest extant sovereign state, as well as the oldest constitutional republic. It is also the most prosperous country in the world in terms of GDP per capita.

You want to know more about San Marino?

This page is based on the article San Marino published in Wikipedia (as of Dec. 31, 2020) and was automatically summarized using artificial intelligence.