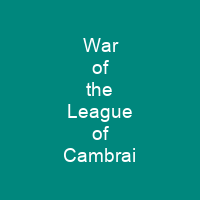 The War of the League of Cambrai was a major conflict in the Italian Wars of 1494–1559. The main participants of the war were France, the Papal States, and the Republic of Venice. It was also joined by nearly every significant power in Western Europe, including Spain, the Holy Roman Empire, England, the Duchy of Milan, and Swiss mercenaries.

About War of the League of Cambrai in brief

The War of the League of Cambrai was a major conflict in the Italian Wars of 1494–1559. The main participants of the war were France, the Papal States, and the Republic of Venice. It was also joined by nearly every significant power in Western Europe, including Spain, the Holy Roman Empire, England, the Duchy of Milan, theRepublic of Florence, and Swiss mercenaries. Pope Julius II, intending to curb Venetian influence in northern Italy, brought together the anti-Venetian alliance in December 1508. The League was initially successful, but friction between Julius and Louis caused it to collapse by 1510. Julius then allied himself with Venice against France. The Veneto–Papal alliance eventually expanded into the Holy League, which drove the French from Italy in 1512. disagreements about the division of the spoils, however, led Venice to abandon the alliance in favor of one with France. Under the leadership of Francis I, who had succeeded Louis on the throne of France, the French and Venetians would, through victory at Marignano in 1515, regain the territory they had lost. The treaties of Noyon and Brussels, which ended the war the next year, would essentially return the map of Italy to the status quo of 1508, with the exception of a few cities in the Adriatic coast that had been taken by the Venetia Senate in 1503. In response, Julius concluded an alliance with France and the HolyRoman Empire against Venice; the death of Isabella I of Castile and the resulting collapse of relations between the parties soon dissolved the alliance, but not before Venice had been induced to abandon several of the cities.

Julius, although unsatisfied with his gains, did not himself possess sufficient forces to fight the Republic; for the next two years he instead occupied himself with the reconquest of Bologna and Perugia, which, located between Papal and Venice territory, had in the meantime assumed a status of quasi-independence. He encouraged Emperor Maximilian I to attack the Republic. In February 1508 he entered Veneto with a large army under Bartolomeo d’Aliano, but was defeated by a VenetIAN army. A second assault by Bartolvomeo was an even greater failure several weeks later; the Imperial army also seized the entire County of Gorizia, as well as Trieste, Fiume, and most portions of Inner Carniume. Julius called for all Christian nations to join him in an expedition to Venice, forcing Venice to conclude a truce with Julius. In the spring of 1509, Julius provoked the Republic by appointing her own candidate to the vacant bishopric of Vicenza. He then launched an attack on Vicenza, forcing the Republic to agree to a truce. The war ended in 1516, with Venice agreeing to pay an annual tribute to Julius II in return for his support. The Treaty of Breda, signed in 1517, was the last major settlement between Venice and Julius II.

You want to know more about War of the League of Cambrai?

This page is based on the article War of the League of Cambrai published in Wikipedia (as of Oct. 30, 2020) and was automatically summarized using artificial intelligence.

Tags: War of the League of Cambrai