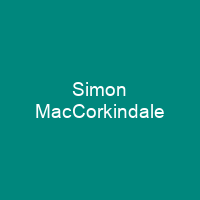 Simon Charles Pendered MacCorkindale was a British actor, film director, writer and producer. He spent much of his childhood moving around due to his father serving as an Officer with the Royal Air Force. Poor eyesight prevented him following a similar career in the RAF, so he instead planned to become a theatre director. He made his stage debut in a production of Pygmalion in 1974.

About Simon MacCorkindale in brief

Simon Charles Pendered MacCorkindale was a British actor, film director, writer and producer. He spent much of his childhood moving around due to his father serving as an Officer with the Royal Air Force. Poor eyesight prevented him following a similar career in the RAF, so he instead planned to become a theatre director. Training at the Theatre of Arts in London, he started work as an actor, making his West End debut in 1974. He went on to appear in numerous roles in television, including the series I, Claudius and Jesus of Nazareth, before starring as Simon Doyle in the film Death on the Nile. In 1983 he starred in the short-lived series Manimal as the lead character, Dr. Jonathan Chase, before taking up the longer-running role of lawyer Greg Reardon in Falcon Crest. Throughout the late 1980s and 1990s he directed and produced many stage, TV and film productions through his company Amy International Artists, such as the film Stealing Heaven. He returned to the United Kingdom in 2002 and joined the cast of the BBC medical drama Casualty, appearing in the role of Harry Harper for six years until 2008. He had previously starred in TV serial The Riddle of the Sands alongside Nigel Kappne, Nigel Mills and John Mills. He won the London Evening Standard Film Award for Most Promising Newcomer for this part in The Childers, the film adaptation of the celebrated Erskine Childers’ novel. He was also awarded the BAFTA Award for Best Actor for his performance in The Children’s Hour, in which he played the lead role of Joe Kappappne.

He also won the BAFTAs for Best Supporting Actor and Best Actress for The Children’s Hour, both for the roles of Joe and Arthur Davies in The Riddles Of The Sands, and for Best Actress for The Childers’ The Riddling of The Sands in the film The Sword and the Sorcerer. His film debut came in 1974 with the film Juggernaut, and he was cast in the adaptation of Agatha Christie’s The Agatha’s Death On the Nile at the age of 25. He made his stage debut in a production of Pygmalion in 1974, appearing alongside Alec McCowen and Diana Rigg in therole of ‘Sarcastic Bystander’. His first professional stage performance was in a 1973 run of A Bequest to the Nation at the Belgrade Theatre in Coventry. He attended Haileybury and Imperial Service College from 1965-70, where he was Head Boy and a member of the Air Training Corps. He considered joining the diplomatic corps to become an ambassador, but instead opted to becoming a stage director after developing an interest in theatre. He moved to Canada in the 1980s to star in the series Counterstrike for three years. He later starred in a number of TV series, including Within, Walls, I, Sutherland, The Riddled of the. Sands and Jaws 3-D. In the 1990s, he appeared in a series of films and TV series including Quatermass, The Sword and the Sorcerer and Jaws.

You want to know more about Simon MacCorkindale?

This page is based on the article Simon MacCorkindale published in Wikipedia (as of Dec. 31, 2020) and was automatically summarized using artificial intelligence.