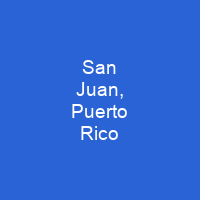 San Juan was founded by Spanish colonists in 1521, who called it Ciudad de Puerto Rico. It is Puerto Rico’s most important seaport and is the island’s manufacturing, financial, cultural, and tourism center. The city has been the host of events within the sports community, including the 1979 Pan American Games and 1966 Central American and Caribbean Games.

Puerto Rico’s capital is the 46th-largest city under the jurisdiction of the United States, with a population of 395,326. San Juan was founded by Spanish colonists in 1521, who called it Ciudad de Puerto Rico. It is Puerto Rico’s most important seaport and is the island’s manufacturing, financial, cultural, and tourism center. The city has been the host of events within the sports community, including the 1979 Pan American Games; 1966 Central American and Caribbean Games; events of the 2006, 2009 and 2013 World Baseball Classics; the Caribbean Series and the Special Olympics and MLB San Juan Series in 2010. The population of the San Juan-Caguas-Fajardo Combined Statistical Area, including San Juan and the municipalities of Bayamón, Guaynabo, Cataño, Canóvanas, Caguas, toa Alta, Toa Baja, Carolina and Trujillo Alto, is about 2. 6 million inhabitants; thus, about 80% of the population of Puerto Rico now lives and works in this area. The damage caused in 2017 by Hurricane Maria was extensive, and significant progress had been made in the capital by April 2019, and particularly by October 2019. It was named after the Province of Cáceres in Spain, the birthplace of Nicolás de Ovando, then the Governor of Spain’s Caribbean territories. In 1508, Juan Ponce de León founded the original settlement which he called Caparra, just to the west of the present San Juan metropolitan area.

A year later, the settlement was moved to a site then called Puerto Rico, Spanish for ‘rich port’ or ‘good port’, after its similar geographical features to Gran Canaria in the Canary Islands. The name Puerto Rico de San Juan Bautista was used for both the city and the island in time. By 1746, the name for the city had become that of the entire island, leading to the city being identified as Puerto Rico De Puerto Rico on maps of the era. The Spanish Empire was used by merchant and military ships traveling from Spain as the first stopover in the Americas. Because of its prominence in the Caribbean, a network of fortifications was built to protect the transports of gold and silver from the New World to Europe. In 1598, San Juan became a target of the foreign powers of the time. The English led by Sir Francis Drake in 1595 and by George Clifford, Earl of Cumberland, in 1598. Artillery from San Juan’s fort, El Morro, repelled Drake; however, Clifford managed to land troops and lay siege to theCity. After a few months of English occupation, Clifford was forced to abandon the siege when his troops began to suffer exhaustion and sickness. In 1625, the city was sacked by Dutch forces led by Captain Balduino Enrico. The Dutch were counterattacked by Captain Juan de Amézqueta and 50 members of the civilian militia.

You want to know more about San Juan, Puerto Rico?

This page is based on the article San Juan, Puerto Rico published in Wikipedia (as of Dec. 28, 2020) and was automatically summarized using artificial intelligence.