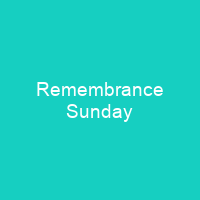 Remembrance Sunday falls in the liturgical period of Allsaintstide. It is marked by ceremonies at local war memorials in most cities, towns and villages. Wreaths of remembrance poppies are laid on the memorials and two minutes’ silence is held.

About Remembrance Sunday in brief

Remembrance Sunday falls in the liturgical period of Allsaintstide. It is marked by ceremonies at local war memorials in most cities, towns and villages. Wreaths of remembrance poppies are laid on the memorials and two minutes’ silence is held at 11am. The focus of remembrance for the dead of the First World War originally fell on Armistice Day itself, commencing in 1919. During the Second World War, the commemorations were moved to the Sunday preceding 11 November as an emergency measure to avoid disruption of the production of vital war materials. In May 1945, just before VE Day, the new government began consultation with the churches and the British Legion on the future of remembrance. The Archbishop of Westminster proposed that the second Sunday in November should be named Remembrance Sunday in commemoration of both World Wars. In June of that year, the prime minister, Clement Attlee, announced in the House of Commons that this view would commend itself to all quarters of the country.

I am glad to say that it has now found general acceptance here and has been approved by The King. The main part of the ceremony consists of wreaths by family and other dignitaries, prayers, music and a march-past by thousands of military and other units. Most notably at the National War Memorial, in Edinburgh in the grounds of Edinburgh Castle, the Welsh War Memorial in Cardiff and at the Cenotaph in Belfast. The service is held for about two hours and ends with the end of The Thank You Nation’s Thank You 1: 30 p.m. The first White Poppies were sold by the Co-operative Women’s Guild in 1933. In 1923 a Christian Pacifist MP was elected to parliament. In the middle 1930s the Peace Pledge Union gained wide support.

You want to know more about Remembrance Sunday?

This page is based on the article Remembrance Sunday published in Wikipedia (as of Nov. 14, 2020) and was automatically summarized using artificial intelligence.