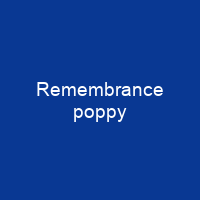 The remembrance poppy is an artificial flower worn to commemorate those who died for their country. Veterans’ associations exchange poppies for charitable donations used to give financial, social and emotional support to members and veterans of the armed forces. The Poppy Lady from France is the woman behind the idea of ‘Inter-Allied Poppy’ Day.

About Remembrance poppy in brief

The remembrance poppy is an artificial flower worn to commemorate those who died for their country. Veterans’ associations exchange poppies for charitable donations used to give financial, social and emotional support to members and veterans of the armed forces. The modern Remembrance Poppy has been trademarked by veterans’ associations in many jurisdictions, particularly in the United Kingdom and the Commonwealth nations. The poppy is often worn on clothing leading up to Remembrance DayArmistice Day, and poppy wreaths are often laid at war memorials. In Australia and New Zealand, they are also worn on Anzac Day. After the Armistice that ended World War I, the French government formed La Ligue des Enfants de France et d’Amérique, a charity which used a poppy as its emblem. Many organizations adopted the poppy as their memorial flower and in 1919, Madame Guérin established Poppy Days, under the auspices of her charity. The Royal British Legion’s Poppy Appeal caused some controversy, with some—including British Army veterans—who argued that the symbol was being used excessively to marshal support for British military campaigns and that public figures were pressured to wear the poppie. The opening lines of the World War II poem \”In Flanders Fields\” refer to poppied growing among the graves of war victims in a region of Belgium. The poem is written from the point of view of the fallen soldiers and in its last verse, the soldiers call on the living to continue the conflict.

In 1921, the V. F. W. organized the first veterans’ Poppy Day Drive in the US, for the 1922 Memorial Day. In 1924, the Veterans of Foreign Wars patented the Buddy Poppy. The Poppy Lady from France is the woman behind the idea of ‘Inter-Allied Poppy’ Day, which was also adopted by military veterans’ groups in parts of the British Empire. She raised funds during WWI for widows, orphans, veterans, U.S. Liberty bonds, and charities such as the Red Cross and Food for France. She was also the first person to wear a red poppy as a symbol of remembrance for those who fought in and assisted with the war. She is also the inspiration for the poppy-wearing campaign by the American YMCA Overseas War Secretaries Organization, which is based in Atlanta, Georgia. The American Legion stopped using the poppy symbol in favor of the daisy in 1920, and supported Madame Guérin in her planned U. S. Poppy Day in 1921. She paid for the British Remembrance Poppies herself and reimbursed the British Legion after the first British Legion reimbursed her for the first Remembrance poppy Day. She also paid the British Field Marshal Haig and the Royal Field Marshal Douglas Haig for the Remembrancebrance Poppies herself after the British Remembrance Day. She has been described as the ‘Poppy Lady from France’ and ‘The PoppyLady from France.’

You want to know more about Remembrance poppy?

This page is based on the article Remembrance poppy published in Wikipedia (as of Dec. 07, 2020) and was automatically summarized using artificial intelligence.