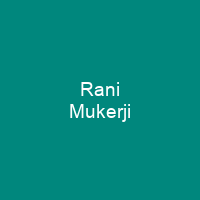 Rani Mukerji is an Indian film actress. She had her first commercial success with the action film Ghulam. In 2002 she was cast by Yash Raj Films as the star of the drama Saathiya. Her roles have been cited in the media as a significant departure from previous screen portrayals of Indian women.

About Rani Mukerji in brief

Rani Mukerji is an Indian film actress. She was born into the Mukherjee-Samarth family, in which her parents and relatives were members of the Indian film industry. As a teenager she dabbled with acting by starring in her father’s Bengali-language film Biyer Phool and in the social drama Raja Ki Aayegi Baraat. She had her first commercial success with the action film Ghulam and breakthrough with the romance Kuch Kuch Hota Hai. In 2002 she was cast by Yash Raj Films as the star of the drama Saathiya. She has starred in several commercially successful romantic films, including Chalte Chalte, Hum Tum, Veer-Zaara and Kabhi Alvida Naa Kehna. She also gained praise for playing an abused wife in the political thriller Yuva, a deaf and blind woman in the drama Black and a Rajasthani bride in the female-led fantasy Paheli. Her roles have been cited in the media as a significant departure from previous screen portrayals of Indian women. She is a trained Odissi dancer and began learning the dance form while in the tenth grade. Her father disapproved of a full-time career in film at such a young age, so she rejected the offer. In 1994, director Salim Khan approached her to play the lead female role in his directorial, Aa Gale Lag Jaa. She starred in the thrillers Talaash: The Answer Lies Within, Mardaani and its sequel Mard aani 2, and the comedy-drama Hichki.

The lattermost emerged as her highest-grossing release. She is involved with humanitarian causes and is vocal about issues faced by women and children. She has featured as a talent judge for the 2009 reality show Dance Premier League. Mukerjis is married to filmmaker Aditya Chopra, with whom she has a daughter. Her paternal cousin, Kajol, is a Hindi film actress and her contemporary. Her maternal aunt, Debashree Roy is a Bengali film actress, and her paternal cousin is a scriptwriter and film director. She said, “There were already too many actresses at home and I wanted to be someone different”; she said, “I wanted to do something different.” Her father, Ram Mukherji, is a former film director and one of the founders of Filmalaya Studios. Her elder brother is a film producer and director. Her mother, Krishna Mukerjee, is a former playback singer. She played the younger sibling of Haldar and Indrani Hatesar in the story of two sisters; Mukerjjis played the older sibling of Prosenjit and Indransjit in the film Mamta Kulkarni. Although she trained at Taneja’s acting institute, she began work on an experimental basis.

You want to know more about Rani Mukerji?

This page is based on the article Rani Mukerji published in Wikipedia (as of Dec. 05, 2020) and was automatically summarized using artificial intelligence.