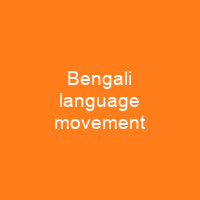 Bengali Language Movement was a political movement in former East Bengal. In 1948, the Government of the Dominion of Pakistan ordained Urdu as the sole national language. The students of the University of Dhaka and other political activists defied the law and organised a protest on 21 February 1952. After years of conflict, the central government relented and granted official status to the Bengali language in 1956.

About Bengali language movement in brief

Bengali Language Movement was a political movement in former East Bengal. In 1948, the Government of the Dominion of Pakistan ordained Urdu as the sole national language. The students of the University of Dhaka and other political activists defied the law and organised a protest on 21 February 1952. The movement reached its climax when police killed student demonstrators on that day. After years of conflict, the central government relented and granted official status to the Bengali language in 1956. In 1999, UNESCO declared 21 February as International Mother Language Day, in tribute to the Language Movement and the ethno-linguistic rights of people around the world. The Language Movement catalysed the assertion of Bengali national identity in East Bengal and later East Pakistan. It became a forerunner to Bengali nationalist movements, including the 6-Point Movement and subsequently the Bangladesh Liberation War. In Bangladesh, 21 February is observed as Language Movement Day, a national holiday. The current nations, Pakistan and Bangladesh, were part of an undivided India during the British colonial rule. After the partition of India in 1947, Bengali-speaking people made up 44 million of the newly formed Dominion ofPakistan’s 69 million people. The use of Urdu grew common with Muslims in northern India, but the Muslims of Bengal primarily used the Bengli language. Urdu is an Indo-Aryan language of the Indo-Iranian branch, closely related to Hindi and belonging to the Indo/European family of languages.

It developed under Persian, Arabic and Turkic influence on apabhramshas in South Asia during the Delhi Sultanate and Mughal Empire. The language was considered a vital element of the Islamic culture for Indian Muslims; Hindi and the Devanagari script were seen as fundamentals of Hindu culture. In the mid-19th century, the Urdu language had been promoted as the lingua franca of Indian Muslims by political and religious leaders, such as Sir Khwaja Salimullah, Sir Syed Ahmed Khan, Nawab Viqar-ul-Mulk and Maulvi Abdul Haq. The Muslim League was a British Indian political party that became the driving force behind the creation of Pakistan as a Muslim state separate from British India. In November 1947, a key resolution at a national education summit advocated English as thesole state languages. The meeting stipulated Bengali as an official language of Pakistan and as a medium of education. However, the Pakistan Public Service Commission removed Bengali from the list of approved subjects, as well as from currency and stamps, and made extensive preparations to make Urdu the only state language. To promote their cause, the students met on 8 December 1947 to formally demand that Bengali be made their official language. They rallied under Abul Kashem Kashem, the secretary of Majaddunlish, a Bengali Islamic organisation. The Students’ Union of Bangladesh was formed to promote the cause of the students and many many Bengali students joined the movement.

You want to know more about Bengali language movement?

This page is based on the article Bengali language movement published in Wikipedia (as of Dec. 04, 2020) and was automatically summarized using artificial intelligence.