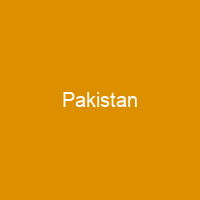 Pakistan, officially the Islamic Republic of Pakistan, is a country in South Asia. It is the world’s fifth-most populous country with a population exceeding 212. 2 million. Pakistan gained independence in 1947 as a homeland for Indian Muslims following the Pakistan Movement.

About Pakistan in brief

Pakistan, officially the Islamic Republic of Pakistan, is a country in South Asia. It is the world’s fifth-most populous country with a population exceeding 212. 2 million. Pakistan has a 1,046-kilometre coastline along the Arabian Sea and Gulf of Oman in the south and is bordered by India to the east, Afghanistan to the west, Iran to the southwest, and China to the northeast. The area has been ruled by numerous empires and dynasties, including the Persian Achaemenid Empire, Alexander III of Macedon’s empire, the Seleucid Empire and the Indian Maurya Empire. Pakistan gained independence in 1947 as a homeland for Indian Muslims following the Pakistan Movement, which sought statehood for the Muslim-majority regions of British India through partition. In 1973, Pakistan adopted a new constitution which stipulated that all laws are to conform to the injunctions of Islam as laid down in the Quran and Sunnah. In 2008, Pakistan transitioned to civilian rule. In 2010 it adopted a parliamentary system with periodic elections. Pakistan is a member of the UN, the Shanghai Cooperation Organisation, the OIC, the Commonwealth of Nations, the SAARC, the Islamic Military Counter Terrorism Coalition, and is a major non-NATO ally. A middle power, Pakistan has the sixth-largest standing armed forces in the world and is also a nuclear power as well as a declared nuclear-weapons state. The name Pakistan means literally \”a land abounding in the pure\” in Urdu and Persian.

It references the word in Persian and Pashto, and means “a place where anything abounds” or “a land in which the pure abound” The name of the country was coined in 1933 by Choudhry Rahmat Ali, a Pakistan Movement activist, who published it in a pamphlet Now or Never, using it as an acronym, and referring to the names of the five northern regions of the British Raj: Punjab, Afghania, Kashmir, Sindh, and Baluchistan. The earliest known inhabitants in the region were stone tools found in the Soan Valley of Punjab during the Lower Paleolithic. The Indus Valley region, which covers most of present-day Pakistan, was the site of several successive cultures including the Neolithic and Bronze Age Indus Civilisation. The Vedic civilisation flourished in the ancient city of Gandhārvan. During this period, an Indo-Aryan culture characterised by Hinduism, was composed of the oldest scriptures associated with Hinduism. This culture later became well established in the city of Takrana, which became an important pilgrimage centre in the area. Some of the earliest ancient human civilisations originated from the region during the soan valley of Soan, in whom stone tools have been found. The region was later home to kingdoms ruled by people of different faiths and cultures, including Hindus, Indo-Greeks, Muslims, Turco-Mongols, Afghans and Sikhs.

You want to know more about Pakistan?

This page is based on the article Pakistan published in Wikipedia (as of Jan. 28, 2021) and was automatically summarized using artificial intelligence.