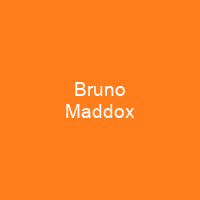 Bruno P. Maddox is a British literary novelist and journalist. He is best known for his novel My Little Blue Dress and for his satirical magazine essays. Maddox was born in London in 1969 to former Nature editor, the late Sir John Maddox.

About Bruno Maddox in brief

Bruno P. Maddox is a British literary novelist and journalist. He is best known for his novel My Little Blue Dress and for his satirical magazine essays. Maddox was born in London in 1969 to former Nature editor, the late Sir John Maddox, a writer on science and nature. After graduating from Harvard University in 1992, Maddox began his career reviewing books for The New York Times Book Review and The Washington Post Book World. In early 1996, he was appointed to an editorship at Spy magazine and within a few months he was promoted to editor-in-chief, a position he held until the magazine shut down in 1998. In 1999, he sold the rights to his first novel, My Little blue Dress, to Simon & Schuster for $25,000. He has also written satirical essays for magazines such as GEAR and Travel + Leisure. He also contributes a monthly humor column to Discover magazine called \”Blinded by Science\”, drawing on his early exposure to science and technology. His father was editor of Nature, and his mother is a biographer of Rosalind Franklin, W. B. Yeats, Nora Barnacle and several others. He has one sister, Bronwen Maddox,. who became a journalist, was Chief Foreign Commentator of The Times and Editor of Prospect magazine and is now Director of the Institute for Government.

She is also a contributing editor to the American edition of The Week magazine. He published his only article in the student newspaper The Harvard Crimson during his senior year. He won the undergraduate Thomas Temple Hoopes Prize for his senior thesis on the use of adjectives in restaurant menus titled Maltese: A Gastrosophic Theory of Reading. After graduation Maddox moved from Cambridge, Massachusetts, to Moscow, where he worked for three weeks as the English-language editor of a Russian magazine. He spent two years working odd jobs, including hand-delivering celebrity invitations to local parties, in New York City. He developed a reputation for writing scathing reviews that would later help him land a job as an editor at Spy. In mid-1996, Madd Ox was hired as a senior editor at spy magazine, a satirical monthly. In March 1998, the magazine’s circulation continued to drop during Maddox’s tenure, and in March 1999, the first issue of Spy was published again. The magazine’s past objects of satire, the \”cheesy villains who anointed themselves as targets\” in the 1980s, were no longer on the national stage. In the ’90s, those of a private, quiet cultivation of purity or ridicule were harder to expose or ridicule.

You want to know more about Bruno Maddox?

This page is based on the article Bruno Maddox published in Wikipedia (as of Dec. 04, 2020) and was automatically summarized using artificial intelligence.