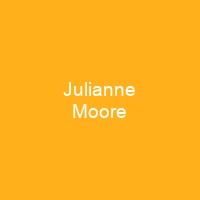 Julie Anne Smith, known professionally as Julianne Moore, is an American-British actress and author. She is especially known for her portrayals of emotionally troubled women in both independent and blockbuster films. As Moore is half-Scottish, she claimed British citizenship in 2011 to honor her deceased mother. Moore is married to director Bart Freundlich, with whom she has two children.

About Julianne Moore in brief

Julie Anne Smith, known professionally as Julianne Moore, is an American-British actress and author. She is especially known for her portrayals of emotionally troubled women in both independent and blockbuster films, and has received many accolades, including an Academy Award, two Emmy Awards, and two Golden Globes. Time magazine named Moore one of the 100 most influential people in the world in 2015. Moore frequently moved around the United States as a child, due to her father’s occupation. She was born Julie Anne Smith on December 3, 1960, at the Fort Bragg army installation in North Carolina, the oldest of three siblings. As Moore is half-Scottish, she claimed British citizenship in 2011 to honor her deceased mother. Moore is married to director Bart Freundlich, with whom she has two children. Her highest-grossing releases include the final two films of The Hunger Games series and the spy film Kingsman: The Golden Circle. In addition to acting, Moore has written a series of children’s books about a character named “Freckleface Strawberry”; she has also written a children’s book series about the same name, as well as a book about a girl who has a crush on her mother’s best friend, also called Julie Anne. She has a younger sister, Valerie Smith, and a younger brother, the novelist Peter Moore Smith. The family lived in multiple locations, including Alabama, Georgia, Texas, Panama, Nebraska, Alaska, New York, and Virginia, and Moore attended nine different schools.

Moore has said that an itinerant lifestyle was beneficial to her future career: “When you move around a lot, you learn that behavior is mutable… It teaches you to watch, to reinvent, that character can change.” She has said she never had the feeling of coming from one particular place. She appeared in several plays, including Tarte and Medea, and with the encouragement of her English teacher, she chose to pursue a theatrical career. After registering her stage name with Actors’ Equity, she began her career with off-Broadway theatre. Her first screen role came in 1985, in an episode of the soap opera As the World Turns. She won an Emmy Award for her portrayal of Sarah Palin in the television film Game Change. She also had success with the films The Big Lebowski, Magnolia, Hannibal, Children of Men, A Single Man, The Kids Are All Right, and Crazy, Stupid, Love. Moore won the Academy Award for Best Actress for her playing an Alzheimer’s patient in Still Alice and was named Best Actress at the Cannes Film Festival for Maps to the Stars. In the late 1990s and early 2000s, she earned Oscar nominations for Boogie Nights, The End of the Affair, Far from Heaven and The Hours. In the first of these, she played a 1970s pornographic actress, while the other three starred her as an unhappy, mid-20th century housewife.

You want to know more about Julianne Moore?

This page is based on the article Julianne Moore published in Wikipedia (as of Dec. 07, 2020) and was automatically summarized using artificial intelligence.