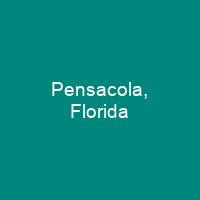 Pensacola is the westernmost city in the Florida Panhandle, and the county seat of Escambia County, Florida. It is the principal city of the Pensacola Metropolitan Area, which had an estimated 502,629 residents as of 2019. The area was originally inhabited by Muskogean-speaking peoples. Spanish explorer Tristán de Luna founded a short-lived settlement in 1559.

About Pensacola, Florida in brief

Pensacola is the westernmost city in the Florida Panhandle, and the county seat of Escambia County, Florida. It is the principal city of the Pensacola Metropolitan Area, which had an estimated 502,629 residents as of 2019. The area was originally inhabited by Muskogean-speaking peoples. Spanish explorer Tristán de Luna founded a short-lived settlement in 1559. In 1698 the Spanish established a presidio in the area, from which the modern city gradually developed. The city is nicknamed \”The City of Five Flags\”, due to the five governments that have ruled it during its history: the flags of Spain, France, Great Britain, the United States of America and the Confederate States of American. It was once the busiest port on the Gulf of Mexico, having the deepest harbor on the gulf. In the age of sailing ships Pensacolas was the busiest city in Florida, with 1,500 people living there at the time of European contact. In 1559, the first Spanish settlement within the borders of the continental U.S. was established, predating the establishment of St. Augustine by 6 years, although the settlement was abandoned due to a hurricane and not re-established until 1698. A large United States Naval Air Station is located southwest of the city near Warrington; it is the base of the Blue Angels flight demonstration team and the National Naval Aviation Museum. The best-known Pensacula culture site in terms of archeology is the Bottle Creek site, a large site located 59 miles north of Mobile, Alabama.

The site has at least 18 large earthwork mounds, five of which are arranged around a central plaza. Its main occupation was from 1250 AD to 1550, It was a ceremonial center for the PensACola people and a gateway to their society. The Creek people frequently visited and traded from present-day southern Alabama and Mississippi and southeast of Louisiana, so the peoples were part of a broader regional and even continental network of relations. The first Europeans to visit the area were Pánfilo de Narváez in 1528 and Hernando de Soto in 1539. During Florida’s British rule, fortifications were strengthened. The French Empire 1719–1722 British Empire 1763–1781 Confederate states of America 1861–1865. The Spanish colony was ultimately abandoned in 1561, but some survivors eventually sailed to Santa Elena, but another storm struck there in 1560. The remaining fifty colonists eventually returned to Pensacolas and took their way to Cuba, where they were taken back to Veracruz, where the remaining fifty were taken to Verruz. The expedition was ultimately called Santa María de Ochuse by Luna, ultimately to be known as Santa Maria de O chuse, or Santa Elena. The name was not recorded until 1677, but the tribe appears to be the source of the name for the bay and thence the city.

You want to know more about Pensacola, Florida?

This page is based on the article Pensacola, Florida published in Wikipedia (as of Dec. 28, 2020) and was automatically summarized using artificial intelligence.