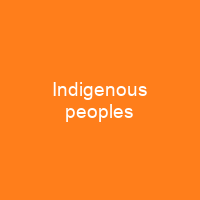 Indigenous first emerged as a way for Europeans to differentiate enslaved black people from the indigenous peoples of the Americas. Not all Indigenous peoples share this characteristic, as many have adopted substantial elements of a colonizing culture, such as dress, religion or language. Estimates of the total global population of Indigenous peoples usually range from 250 million to 600 million.

About Indigenous peoples in brief

Indigenous first emerged as a way for Europeans to differentiate enslaved black people from the indigenous peoples of the Americas. Not all Indigenous peoples share this characteristic, as many have adopted substantial elements of a colonizing culture, such as dress, religion or language. Estimates of the total global population of Indigenous peoples usually range from 250 million to 600 million. Indigenous societies are found in every inhabited climate zone and continent of the world except Antarctica. It is estimated that there are approximately five thousand Indigenous nations throughout the world. The vast majority of Indigenous nations and peoples globally were displaced by European colonialism over the past five centuries and are now incorporated into political constructs known as states. Indigenous peoples continue to face threats to their sovereignty, economic well-being, languages, ways of knowing, and access to the resources on which their cultures depend. In 2007, the United Nations issued a Declaration on the Rights of Indigenous Peoples to guide member-state national policies to the collective rights of Indigenous people. The term ‘indigenous peoples’ refers to culturally distinct groups affected by colonization. It started being used in the 1970s to link experiences, issues and struggles of groups of colonized people across international borders. The use of the’s’ in ‘peoples’ recognizes thatthere are real differences between different indigenous peoples. Any given people, ethnic group or community may be described as Indigenous in reference to some particular region or location that they see as their traditional indigenous land claim. In Europe, except for a few groups like the Sámi, the category is no longer applicable.

In settler states colonized by Europeans, Indigenous status is generally unproblematically applied to groups descended from peoples who lived there prior to European invasion and settlement. In Asia and Africa, where the majority ofigenous peoples live, Indigenous population figures can be much less clear as states there drastically reduce the number of Indigenous families. The words original, autochthonous or first are also used to refer to first peoples, Aboriginal peoples, Native peoples and Fourth World Peoples. Different states designate different groups within their boundaries that are recognized as indigenous peoples according to international legislation by different national legislation. The word ‘Indigenous’ is derived from the Latin word indigena, which is based on the root -genus, \”to be born from\”, and the Old Latin prefix indu-, \”in\”. It is not related in any way to the origins of the term ‘Indian’, which until recently was commonly applied to indigenous peoples in the Americas and is now used in international law by the U.N., the World Bank and the International Labour Organization. The U.S. State Department is the only country that recognises Indigenous people as a legal category in indigenous law created in international and national legislation, as well as the Australian and New Zealand governments. In Australia, the term Indigenous people also includes people indigenous based on their descent from their indigenous populations that inhabited the country when non-indigenous religions and cultures arrived at the establishment of the country. The United Nations, the International Labor Organization and the WorldBank recognize Indigenous peoples as people of the land.

You want to know more about Indigenous peoples?

This page is based on the article Indigenous peoples published in Wikipedia (as of Jan. 04, 2021) and was automatically summarized using artificial intelligence.

Native Americans in the United States