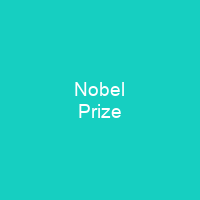 Alfred Nobel was a Swedish chemist, engineer, and industrialist most famously known for the invention of dynamite. In his will, he bequeathed all of his remaining realisable assets to be used to establish five prizes. The Nobel Prizes are awarded in the fields of Physics, Chemistry, Physiology or Medicine, Literature, and Peace. The prizes have been awarded 603 times to 962 people and 25 organizations.

About Nobel Prize in brief

Alfred Nobel was a Swedish chemist, engineer, and industrialist most famously known for the invention of dynamite. In his will, he bequeathed all of his remaining realisable assets to be used to establish five prizes. The Nobel Prizes are awarded in the fields of Physics, Chemistry, Physiology or Medicine, Literature, and Peace. In 2020, the Nobel Prize monetary award is 10,000,000 SEK, or US$1,145,000. A prize may not be shared among more than three individuals, although the Nobel Peace Prize can be awarded to organizations of more than 3 people. The prize ceremonies take place annually. Each recipient receives a gold medal, a diploma, and a monetary award. Although Nobel Prize are not awarded posthumously, if a person is awarded a prize and dies before receiving it the prize is presented. The prizes have been awarded 603 times to 962 people and 25 organizations. Four individuals have received more than one Nobel Prize. According to Alfred Nobel’s will, according to the official sources, The Nobel Foundation was founded as a private organization on 29 June 1900. The foundation now forms the base of the economic base of The Nobel Prize Foundation that now awards the Nobel prizes in physics, chemistry, physiology or medicine, literature, and peace. In 1968, a sixth prize was established in the field of Economic Sciences; however, it is not considered a Nobel Prize, but a \”Nobel Memorial Prize\”. Owing to skepticism surrounding the will, it was not approved by the Storting in Norway until 26 April 1897. The executors of the will were Ragnar Sohlman and Rudolf Lilljequist, who formed the Nobel Foundation to take care of the fortune and to organise the awarding of prizes.

Nobel’s instructions named a Norwegian Nobel Committee to award the Peace Prize, the members of whom were appointed shortly after the will was approved in April 1897, Soon thereafter, the other prize-awarding organizations were designated. These were Karinska Institute, the Swedish Academy on 9 June, and the Royal Swedish Academy of Sciences on 11 June. In 1905, the personal union between Sweden and Norway was dissolved between the King Oscar II and the Swedish Nobel Foundation. The award is now given to those who serve humanity who have made a significant contribution to the world of science, medicine, and literature. The winner of the Nobel Memorial Prize in Economic Sciences is chosen by a committee of experts from around the world and is awarded in a ceremony in Stockholm every year. The ceremony takes place on the anniversary of the death of Alfred Nobel, who died on 10 December 1896, in San Remo, Italy, from a cerebral haemorrhage. Nobel amassed a fortune during his lifetime, with most of his wealth coming from his 355 inventions, of which dynamite is the most famous. In 1888, Nobel was astonished to read his own obituary, titled The merchant of death is dead, in a French newspaper. The article disconcerted Nobel and made him apprehensive about how he would be remembered. In 1894, Nobel purchased the Bofors iron and steel mill, which he made into a major armaments manufacturer.

You want to know more about Nobel Prize?

This page is based on the article Nobel Prize published in Wikipedia (as of Dec. 19, 2020) and was automatically summarized using artificial intelligence.