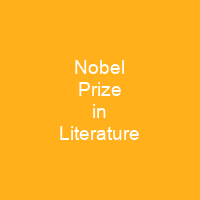 The Nobel Prize in Literature is one of the five Nobel Prizes established by the will of Swedish industrialist Alfred Nobel in 1895. The Swedish Academy decides who, if anyone, will receive the prize. The academy announces the name of the laureate in early October. A laureate earns a gold medal, a citation, and a sum of money.

About Nobel Prize in Literature in brief

The Nobel Prize in Literature is one of the five Nobel Prizes established by the will of Swedish industrialist Alfred Nobel in 1895. The Swedish Academy decides who, if anyone, will receive the prize. The academy announces the name of the laureate in early October. On some occasions the award has been postponed to the following year, most recently in 2018. In the midst of controversy surrounding claims of sexual assault and resignations, the Swedish Academy announced that the 2018 laureate would be announced in 2019 along with the 2019 laureate. A laureate earns a gold medal, a citation, and a sum of money. If a prize is awarded to two or more laureates, the money is split among them as the prize money depends on the income of the Nobel Foundation that year. If more than one laureate is awarded the prize, it is either evenly divided among them or, for three laureates for three years in a row, it may be split into two quarters and two quarters. The amount of the prize has been fluctuating since its inauguration but has been around $1.5 million since 1901. The award is usually announced in October. Sometimes, however, it has been announced the year after the nominal award, the latest being the 2018 award. The prize is given to an author from any country who has produced in the field of literature the most outstanding work in an ideal direction. Though individual works are sometimes cited as being particularly noteworthy, the award is based on an author’s body of work as a whole.

It is not permitted to nominate oneself. Thousands of requests are sent out each year, and as of 2011 about 220 proposals were returned. By April, the Academy narrows the field to around twenty candidates. By May, a short list of five names is approved by the Committee. In October, members of the Academy vote and the candidate who receives more than half of the votes is named the Nobel laureate in Literature. No one can get the prize without being on the list at least twice; thus many authors reappear and are reviewed repeatedly over the years. The judges are composed of an 18 member committee who are elected for life, and until 2018 not technically permitted to leave. On 2 May 2018, King Carl XVI Gustaf amended the rules of the academy and made it possible for members to resign. The prize-awarding organisations followed: the Karolinska Institutet on 7 June, the Sweden Academy on 9 June, and the Royal Swedish Academy of Sciences on 11 June. The Nobel Foundation then reached an agreement on guidelines for how the Nobel Prize should be awarded. In 1900, theNobel Foundation’s newly created statutes were promulgated by King Oscar II. The Prize is awarded for works that confer the \”greatest benefit on mankind\” in physics, chemistry, peace, physiology or medicine, and literature. The winner is announced on 4 May 2018 along with a citation and a diploma, bearing a medal and a citation. The winners are announced on 5 May 2018.

You want to know more about Nobel Prize in Literature?

This page is based on the article Nobel Prize in Literature published in Wikipedia (as of Jan. 04, 2021) and was automatically summarized using artificial intelligence.