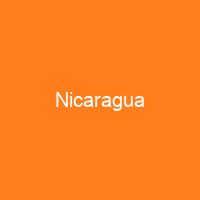 Nicaragua is the largest country in the Central American isthmus. It is bordered by Honduras to the northwest, the Caribbean to the east, Costa Rica to the south, and the Pacific Ocean to the southwest. The biological diversity, warm tropical climate and active volcanoes make Nicaragua an increasingly popular tourist destination.

About Nicaragua in brief

Nicaragua is the largest country in the Central American isthmus. It is bordered by Honduras to the northwest, the Caribbean to the east, Costa Rica to the south, and the Pacific Ocean to the southwest. The multi-ethnic population of six million includes people of indigenous, European, African, and Asian heritage. The biological diversity, warm tropical climate and active volcanoes make Nicaragua an increasingly popular tourist destination. The country’s capital and largest city is Managua, which is also the third-largest city in Central America, behind Tegucigalpa and Guatemala City. The main language is Spanish. Indigenous tribes on the Mosquito Coast speak their own languages and English. Originally inhabited by various indigenous cultures since ancient times, the region was conquered by the Spanish Empire in the 16th century. Nicaragua gained independence from Spain in 1821. It became an autonomous territory of Nicaragua in 1860 and its northernmost part was transferred to Honduras in 1960. Since its independence, Nicaragua has undergone periods of political unrest, dictatorship, occupation and fiscal crisis, including the Nicaraguan Revolution of the 1960s and 1970s and the Contra War of the 1980s. The mixture of cultural traditions has generated substantial diversity in folklore, cuisine, music, and literature, particularly the latter, given the literary contributions of Nicaraguan poets and writers such as Rubén Darío.

In later pre-Columbian times, Nicaragua’s indigenous people were part of the Intermediate Area,: 33 between the Mesoamerican and Andean cultural regions, and within the influence of the Isthmo-Colombian area. The name Nicaragua was formed from Nicarao and agua, to reference the fact that there are two large lakes and several other bodies of water within the country. It was determined that the cacique’s real name was Macuilmiquiztli, which meant \”Five Deaths\” in the Nahuatl language, rather than Nicaraa. The second theory is that the country’s name comes from any of the following Nahuat words: nic-anahuac, which means \”Anahuac reached this far\”, or \”the Nahuas came this far\” or nic-atl-nahuac,. or \”here by the water\” or \”surrounded by water\”. Paleo-Americans first inhabited what is now known as Nicaragua as far back as 12,000 BCE. They lived a life based primarily on hunting and gathering, as well as fishing, and performing slash-and-burn agriculture. The Chotegas were language ethnic groups who had arrived in Nicaragua from the Mexican state of Chiapas sometime around around 800 CE. The Pipilarao people were a branch of the Chororotegas who spoke the Nahua dialect, and they had come to Nicaragua in approximately 1200 CE. There were trade colonies in Nicaragua starting in the 14th century that had been set up by the Aztecs and the Pipil-Nicaraos.

You want to know more about Nicaragua?

This page is based on the article Nicaragua published in Wikipedia (as of Jan. 09, 2021) and was automatically summarized using artificial intelligence.