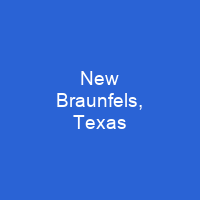 New Braunfels was established in 1845 by Prince Carl of Solms-Braunfels, Commissioner General of the Mainzer Adelsverein. The first settlers forded the Guadalupe River on Good Friday, March 21, 1845, near the present-day Faust Street bridge. The city covers 44. 9 square miles and has a 2019 census-estimated population of 90,209.

About New Braunfels, Texas in brief

New Braunfels was established in 1845 by Prince Carl of Solms-Braunfels, Commissioner General of the Mainzer Adelsverein, also known as the Noblemen’s Society. The city covers 44. 9 square miles and has a 2019 census-estimated population of 90,209. It was the third-fastest-growing city in the United States from 2010-2020. It is a suburb just north of San Antonio, and part of the Greater San Antonio metropolitan area, and is the seat of Comal County. The first settlers forded the Guadalupe River on Good Friday, March 21, 1845, near the present-day Faust Street bridge. Prince Carl bought two leagues of land from Rafael Garza and Maria Antonio Veramendi Garza for USD 1,111. 00. The land was about halfway between Indianola and the lower portions of the Fisher-Miller land grant. In 1844, Prince Carl was so disillusioned with the logistics of the colonization that he asked the Verein to remove him as commissioner-general and appoint a successor. When John O. Meusebach arrived, the finances were in disarray, due in part to Prince Carl’s lack of business experience and his refusal to keep financial records. The choice of the inadequate Carlshafen as a port of entry, as well as the isolated route to New BraunFels, was deliberately chosen to keep the Germans from interacting with any Americans.

Upon seeing his reddish-blonde hair, they called him Ma-quo-si-mu-be, which means “Chief with the burning hair of the burning fire” In May 1846, Meusedbach received a letter from Count Castell of Castell, informing him that emigrants were on their way to Texas. With no funds and no new settlements, no one was to head for the head of the last resort for the emigrants, and his requests for more money were denied. In August 1845 the first teacher for the German-English school was established with the help of the local tribe of Waco-be-si, or Waco Indians. The settlers built the Zinkenburg, a fort named for Adelsville civil engineer Nicolaus Zink, divided the land, and began building homes and planting crops. The Germans built the Sophienburg, a permanent fort and center for the immigrant association. In the spring of 1845,. the settlers built the \”Zinkenburg\”, a Fort named for Zink. The German-American colony was named after Prince Carl, who had planned to establish a German feudal state by secretly bringing in immigrants and placing them in military fortresses. He had renounced his own title of nobility, and invited Americans to settle in Vereins territory. He converted a military unit at the ready in Indianola to a more needed work detail.

You want to know more about New Braunfels, Texas?

This page is based on the article New Braunfels, Texas published in Wikipedia (as of Dec. 31, 2020) and was automatically summarized using artificial intelligence.