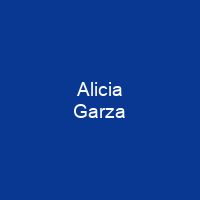 Alicia Garza is an American civil rights activist and writer. She is known for co-founding the international Black Lives Matter movement. Her editorial writing has been published by The Guardian, The Nation, Rolling Stone, and Truthout. She currently directs Special Projects at the National Domestic Workers Alliance.

About Alicia Garza in brief

Alicia Garza is an American civil rights activist and writer. She is known for co-founding the international Black Lives Matter movement. Her editorial writing has been published by The Guardian, The Nation, Rolling Stone, and Truthout. She currently directs Special Projects at the National Domestic Workers Alliance. Garza’s first book, The Purpose of Power: How To Come Together When We Fall Apart, will be published in October 2020 by Penguin Random House. The Movement for Black Lives was created following concerns over the way that Black lives Matter had become synonymous with the Ferguson riots. The movement and Garza are credited for popularizing the use of social media for mass mobilization in the U.S., a practice called “mediated mobilization” Garza led the 2015 Freedom Ride to Ferguson, organized by Opal Tometi and Patrisse Cullors, that launched the building of BlackLivesMatter chapters across the United States and the world. She has organized around the issues of health, student services and rights, rights for domestic workers, ending police brutality, anti-racism, and violence against transgender and gender non-conforming people of color. She was born in Oakland, California, on January 4, 1981, and identifies as Jewish.

In 2008, she married Malachi and took the name Garza, settling in Oakland. In 2003 she met Malachi, a transgender man and a community activist. In 2004, Alicia came out as queer to her family. During her time in San Francisco Bay Area, she won the position of director of People Organized to Win Win Win for the right to use free public transportation for youth to use public transport for free. She also campaigned against gentrification and police brutality in the San Francisco area. In 2013, Garza wrote: “I continue to be surprised at how little Black lives matter… Our lives matter.” She was also struck by the similarities of Trayvon Martin to her younger brother, Joey, feeling that Joey could have been killed instead. She feels her work is only a continuation of the resistance led by Black people in America. She does not think of the Black Lives Lives Matter Movement as her creation; she feels it is a part of a larger movement to end police brutality and racial disparities in the criminal legal system. In 2015, The Movement For Black Lives created the Policy Table in an attempt to translate their goals into a policy platform.

You want to know more about Alicia Garza?

This page is based on the article Alicia Garza published in Wikipedia (as of Nov. 24, 2020) and was automatically summarized using artificial intelligence.