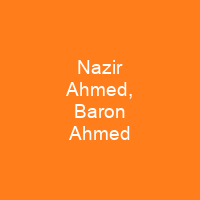 Nazir Ahmed, Baron Ahmed is a former member of the House of Lords. He was created a life peer on the recommendation of Prime Minister Tony Blair in 1998. He sat in the House until his retirement in 2020, prior to pending expulsion after being found guilty by the Labour Conduct Committee of sexually exploiting a young woman.

Nazir Ahmed, Baron Ahmed is a former member of the House of Lords. He was created a life peer on the recommendation of Prime Minister Tony Blair in 1998. He sat in the House until his retirement in 2020, prior to pending expulsion after being found guilty by the Labour Conduct Committee of sexually exploiting a young woman. Many of his political activities relate to the Muslim community both in the UK and abroad. In 2013, he alleged a Jewish conspiracy for a prison sentence he received following a fatal motorway crash. In August 2006 he was a signatory to an open letter to Tony Blair, the prime minister, criticising the UK’s foreign policy. On 19 June 2007 Ahmed criticised the honouring of Salman Rushdie with a knighthood because of what he saw as Rushdie’s offensiveness to Islam. In September 2007, Ahmed flew to Islamabad with Pakistan’s former prime minister Nawaz Sharif in a bid to end a bid for the end of a ceasefire between India and Pakistan. He led the first delegation on behalf of the British Government on the Muslim pilgrimage of the Hajj. At home, he speaks on wider equality issues, and has spoken several times on issues of race, religion and gender; he has advocated legislation against religious discrimination and forced marriages. He claims to have changed the policies of the Labour Party to the extent that, for the first time in British history, Kashmir was discussed on the floor of the conference. In February 2005, he hosted a book launch for controversial Swedish writer Israel Shamir, during which the latter claimed: \”The Jews like an Empire…

This love of Empire explains the easiness Jews change their allegiance…  Simple minds call it ‘treacherous behaviour’, but it is actually love of empire per se’ He is associated with the Justice Foundation, which organised that conference and whose director at that time was Syed Ghulam Nabi Fai – a Pakistani Kashmir lobbyist arrested by the USA for spying and illegal lobbying. Although there have been many claims that he was the first Muslim life peer, including by Ahmed himself, or the first male Muslim peer, he was in fact the third Muslim lifepeer; the other two, Baroness Uddin and Lord Alli, were raised to the Peerage on 18 July whereas Lord Ahmed was so raised on 3 August. There have been earlier Muslim hereditary peers, the first being the 3rd Baron Stanley of Alderley in 1869. He is the first Asian councillor in Rotherham and the town’s youngest magistrate. He enjoyed backing from the Pakistan government, and is known for lobbying in the British Parliament on the Kashmir issue on Pakistan’s behalf, including holding anti-India protests outside the Indian Embassy in London to educate the international community. He has been a councillor since 1990 and was the chair of the South Yorkshire Labour Party in 1993 and holding both positions until 2000. He also founded the British Muslim Councillors’ Forum and was a magistrate between 1992 and 2000. In 2007, he said on BBC Radio 4 that he had been appalled by the award to a man he had ‘blood on his hands’

You want to know more about Nazir Ahmed, Baron Ahmed?

This page is based on the article Nazir Ahmed, Baron Ahmed published in Wikipedia (as of Dec. 01, 2020) and was automatically summarized using artificial intelligence.