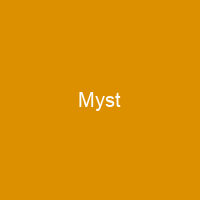 Myst is a graphic adventure puzzle video game designed by the Miller brothers, Robyn and Rand. It was initially released for the Macintosh personal computer platform in 1993. Selling more than six million copies, Myst became the best-selling PC game, until The Sims exceeded Myst sales in 2002. Myst helped drive adoption of the new CD-ROM format, spawned a multimedia franchise, and inspired clones and parodies.

About Myst in brief

Myst is a graphic adventure puzzle video game designed by the Miller brothers, Robyn and Rand. It was developed by Cyan, Inc. and published by Broderbund, and initially released for the Macintosh personal computer platform in 1993. Selling more than six million copies, Myst became the best-selling PC game, until The Sims exceeded Myst sales in 2002. Myst helped drive adoption of the new CD-ROM format, spawned a multimedia franchise, and inspired clones, parodies, and new genres of video games. Multiple remakes and ports of the game to other platforms have been released, as well as spin-off novels and other media. Players travel via a special book to the island of Myst. There, players solve puzzles and, by doing so, travel to four other worlds, known as Ages. The game’s gameplay consists of a first-person journey through an interactive world. Players can interact with specific objects on some screens by clicking or dragging them. The player moves by clicking on locations shown on the screen; the scene then crossfades into another frame, and the player can explore the new area. Myst’s gameplay is unusual among adventuring computer games in several ways. There are no obvious enemies, no physical violence, no time limit to complete the game, and no threat of dying at any point. It unfolds at its own pace and is solved through a combination of patience, observation, and logical thinking. Some items can be carried by the player and read, including journal pages which provide backstory.

Myst contains a library where two additional books can be found, colored red and blue. These books are traps that hold Sirrus and Achenar, the sons of Atrus, who once lived on Myst island with his wife Catherine. From the books, Atrus writes special panels of their books that transport people to the worlds, that tell the player that Atrus is dead; each brother blames the other for the death of their father. As the player continues to explore the island, more books are discovered, linking to more Ages are discovered. These pages can then be placed in the corresponding pages to return to Myst, and there the player must visit each Age, find hidden mechanisms and puzzles behind the pages, and then return to the Island. Myst has an optional \”Zip\” feature to assist in rapidly crossing areas already explored; when a lightning bolt cursor appears, players can click and skip several frames to another location. For example, in order to activate a switch, players must first discover a combination to a safe, open it, and use the matches found within to start a boiler. : 9 Some pages can be carry by thePlayer can only carry a single page at a time, and pages return to their original locations when dropped. : 13 To complete thegame, the playermust explore the Island of Myst, where the player discovers and follows clues to be transported via \”linking books\” to several \”Ages\”, each of which is a self-contained mini-world.

You want to know more about Myst?

This page is based on the article Myst published in Wikipedia (as of Dec. 07, 2020) and was automatically summarized using artificial intelligence.