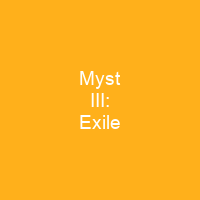 Myst III: Exile is the third title in the Myst series of graphic adventure puzzle video games. It was released on four compact discs for both Mac OS and Microsoft Windows on May 8, 2001; versions for the Xbox and PlayStation 2 were released in late 2002. Despite selling more than one million copies within the first year of release, Exile performed worse commercially than Myst and Riven.

About Myst III: Exile in brief

Myst III: Exile is the third title in the Myst series of graphic adventure puzzle video games. It was released on four compact discs for both Mac OS and Microsoft Windows on May 8, 2001; versions for the Xbox and PlayStation 2 were released in late 2002. The player assumes the role of a friend of Atrus, a member of the D’ni race, who can create links to other worlds by writing descriptive books. Despite selling more than one million copies within the first year of release, Exile performed worse commercially than Myst and Riven. Myst IV: Revelation, the fourth game in the series, was developed and published solely by Ubisoft. The game was well-received by critics; The Daily Telegraph called it the best game inthe Myst series. It has been described as one of the best games of all time by GameSpot editor Greg Kasavin, who also said it proved that the series had lost its relevance in the modern game market. The developers hired Jack Wall to develop a musical style different from earlier composer Robyn Miller but still recognizable as a Myst game. The project required millions of U.S. dollars and more than two years to complete. It is the only Myst game not to have been made into a film or a TV series. In Exile, Atrus has written an Age for the D’ni to live on while rebuilding their civilization. The book is stolen by a mysterious figure; the player pursues the thief in an attempt to reclaim Atrus’ tablet.

Following the thief, the player arrives at J’nanin, an Age that acts as a hub linking to other Ages and as a ‘lesson Age’ The game also has an optional ‘zip’ mode to rapidly cross explored terrain by skipping nodes. Clicking allows the player to manipulate objects and pick up items. The on-screen cursor changes to show contextual actions. Each of the game’s Ages has a distinctive look and theme. For example, the book leading to Voltaic is accessed by aligning beams of light across a canyon; the Age itself contains similar energy-based puzzles. The player can also pick up and view journals or pages written by game characters which reveal back-story and give hints to solving puzzles. By gathering clues and manipulating the environment, the player solves thematically linked puzzles. For. example, Edanna’s plant-filled puzzles require manipulation of the Age’s ecosystem. A man appears in Atrus’ study, steals the Releeshahn, and leaves another book behind. Because the thief has caused considerable damage to the book, Atrus cannot accompany the player on the journey to J’nanin. Twenty years later, a mysterious man named Saavedro appears in the player’s study, stealing the book and leaving another Age that Atrus had written long before he had written it as a way to teach his sons to teach the Art to his sons.

You want to know more about Myst III: Exile?

This page is based on the article Myst III: Exile published in Wikipedia (as of Dec. 07, 2020) and was automatically summarized using artificial intelligence.