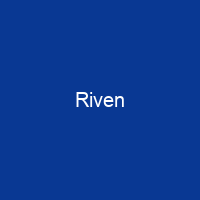 Riven is a puzzle adventure video game. It is the sequel to Myst and second in the Myst series of games. The game was released on October 31, 1997, in North America. It was initially published by Red Orb Entertainment, a division of Broderbund. The next game in the series, Myst III: Exile, was developed by Presto Studios and published by Ubisoft.

About Riven in brief

Riven is a puzzle adventure video game. It is the sequel to Myst and second in the Myst series of games. The game was released on October 31, 1997, in North America. It was initially published by Red Orb Entertainment, a division of Broderbund. Riven was praised by reviewers, with the magazine Salon proclaiming that the game approaches the level of art. The best-selling game of 1997, Riven sold 1. 5 million copies in one year. The next game in the series, Myst III: Exile, was developed by Presto Studios and published by Ubisoft. The player explores immersive environments depicted through a large series of computer generated stills using mouse clicks for movement or to manipulate objects within reach. By operating mechanical contraptions and deciphering codes and symbols discovered in the surroundings, the vaguely explained goal can eventually be reached. To navigate the world, the player simply clicks in the direction they want to walk or turn. The cursor changes in appearance, depending on its position on the screen and what it is hovering over, to show what effect clicking will have. Such items can then be examined at any time, and either reveal clues to puzzles or provide information on the game’s setting and story. Like Myst, the game has an optional method of navigation known as Zip Mode, which allows players to skip to areas already explored, but may cause them to miss important clues. The objective of the game is to travel to different Ages to solve puzzles before returning to a hub Age.

Much of it consists of solving puzzles to access new areas of the islands, though players are also able to explore without fulfilling objectives. The volcanic landscape depicted, with its steep cliffs and crater lakes, is bestrewn with mechanical, Victorian-style artifacts such as elevators, pipes, levers, roller coaster-like transports, and roller coaster like transports as well as the fictional culture of Riven’s story where Myst and its companion novel The Book of Atrus continue. The main non-player protagonist Atrus enlists the help of the player character to free his wife from his power-hungry father, Gehn. Thirty years earlier, Atrus knows the art of creating books that serve as portals to other worlds known as “Ages” Atrus needs the Stranger’s help to free Catherine, who is held hostage in her ancient home. Her captor is Gehn’ manipulative father and self-declared ruler of the Age of RIVen, which is slowly falling apart due to Gehn’s destructive rule. After its release, Robyn Miller left Cyan to form his own development studio, ending the professional partnership of the two brothers. Rand stayed at Cyan and continued to work on Myst-related products including The Myst Reader and the real-time rendered game Uru: Ages Beyond Myst. The next entry in the Myst series, Myst III: Exile, was released in 1998 and was published by Preste Studios. It has been ported to several other platforms.

You want to know more about Riven?

This page is based on the article Riven published in Wikipedia (as of Dec. 07, 2020) and was automatically summarized using artificial intelligence.