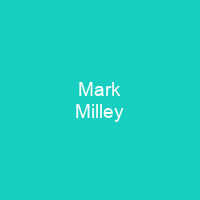 Mark Alexander Milley is a United States Army general. He is the 20th Chairman of the Joint Chiefs of Staff. Milley earned his commission as an Armor officer through Princeton’s Army Reserve Officers’ Training Corps program in 1980. He has had multiple command and staff positions in eight divisions and Special Forces.

About Mark Milley in brief

Mark Alexander Milley is a United States Army general. He is the 20th Chairman of the Joint Chiefs of Staff. He previously served as the 39th Chief of Staff of the U.S. Army. Milley earned his commission as an Armor officer through Princeton’s Army Reserve Officers’ Training Corps program in 1980. He has had multiple command and staff positions in eight divisions and Special Forces throughout the last 39 years to include command of the 1st Battalion, 506th Infantry, 2nd Infantry Division. In February 2017, the Army announced the establishment of Security Force Assistance Brigades. Also known as SFABs, these permanent units were established in Fort Benning with a core mission to conduct security cooperation activities and serve as a quick response to combatant commander requirements. In November 2000, he participated in the 2nd Annual Army-Navy Ice Hockey Game in Honolulu, Hawaii, a charity event benefiting youth ice hockey players in the area. In 2018, Milley established Army Futures Command in Austin, Texas, to take advantage of nearby academic and industrial expertise to further the Army’s modernization efforts. In his initial message to the Army, General Milley laid out his priorities on readiness, the future Army, and taking care of troops. He said: \”We must ensure the Army remains ready as the world’s premier combat force.

Readiness for ground combat is- and will remain- the US Army’s #1 priority. We will do what it takes to build an agile, adaptive Army of the future. If we do not, we will lose the next war,\” Milley warned. He also said that the Army will continue to be the most lethal fighting force in the world for the next seven decades and beyond. He is also an attendee of the MIT Center for International Studies Seminar XXI National Security Studies Program. He was appointed chief of Staff on August 14, 2015, and served as Commanding General of United US Army Forces Command, based at Fort Bragg, North Carolina, from 2014 to 2015. He served as Deputy Commanding general of 101st Airborne Division from July 2007 to April 2008, and was Commander of the 10th Mountain Division from November 2011 to December 2012. He then served as commanding general of III Corps, based in Texas, from 2012 to 2014, and as Commanded General of Army Material Command, Army Material and Training Command from 2013 to 2014. In 2016, he was appointed Chief of the Army Staff, serving as the Chief of Army Staff until the end of his term in August 2015. In 2017, he became Chief of General Staff, with a five-year term.

You want to know more about Mark Milley?

This page is based on the article Mark Milley published in Wikipedia (as of Dec. 08, 2020) and was automatically summarized using artificial intelligence.