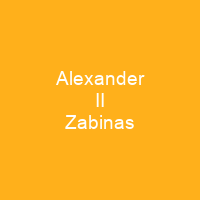 Alexander II Theos Epiphanes Nikephoros reigned as the King of Syria between 128 BC and 123 BC. His true parentage is debated; most ancient historians and the modern academic consensus maintain he was a pretender. His rise is connected to the dynastic feuds of the Seleucid Empire. He was probably executed by Antiochus VIII in 123 BC, ending the line of Antiochus IV.

About Alexander II Zabinas in brief

Alexander II Theos Epiphanes Nikephoros reigned as the King of Syria between 128 BC and 123 BC. His true parentage is debated; most ancient historians and the modern academic consensus maintain he was a pretender. Alexander II’s rise is connected to the dynastic feuds of the Seleucid Empire. He was probably executed by Antiochus VIII in 123 BC, ending the line of Antiochus IV. His sister-wife and co-ruler, Cleopatra Thea, then married her other brother, Ptolemy VIII, who became herruler Diodotus VI. The Egyptian king was wounded during the battle and died shortly after Alexander I’s death in 144 BC. Alexander I was declared the official king of Syria by his former father-in-law Tryphon, who was defeated and killed in 145 BC. In 150 BC Alexander I managed to dethrone and kill Demetrius I, an illegitimate son of AntiochUS IV. He married Cleopatriot Thea of P tolemaic Egypt, who later became his ally and supporter and supporter of his policy and his son Demrius II, marrying him to his former wife. The king changed his name to Alexander I Theos, which means ‘the bought one’, a Semitic name that is usually translated as ‘bought from the god’ The king was killed while trying to find refuge in the city of Tyre, but she expelled him and he was eventually captured and killed.

He is buried in the Temple of Zeus in Antioch, where he pillaged the temple of Zeus to pay his soldiers; the population turned against him, and he fled and was finally captured. He died in 125 BC, and his body was found in a ditch near the town of PTolemais, in what is now known as the village of Tiberius, in the province of Syria. His son Alexander I theos was later killed in a battle and buried by his father- in-law Diodon, the king of Egypt, in 150 BC. The son of Alexander I, Alexander I died in 145BC, and was buried in a tomb near Tiberios. His daughter Alexander I theos was later killed by his brother Tryph on the orders of the Egyptian king, who then killed him and then killed his son Alexander II theos. The father of Alexander II was Alexander I  who died in 144BC, but was buried alongside his brother Alexander I. Alexander I was also buried in Tiberias, in which he was buried along with his wife Cleopatra Thea. He had a son, Alexander III, and a daughter, Alexander IV, who died in 150BC. Alexander IV died in 165 BC, but his son Antiochus V succeeded to the throne. Alexander III died in 164 BC, leaving Syria in a state of political turmoil. His grandson, Antiochus VI, was declared king, but he died in 161 BC.

You want to know more about Alexander II Zabinas?

This page is based on the article Alexander II Zabinas published in Wikipedia (as of Nov. 03, 2020) and was automatically summarized using artificial intelligence.