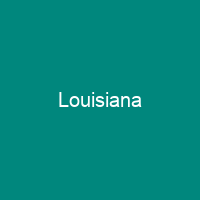 Louisiana is a state in the Deep South region of the South Central United States. It is the 19th-smallest by area and the 25th most populous of the 50 U.S. states. Louisiana was named after Louis XIV, King of France from 1643 to 1715. It has more Native American tribes than any other southern state.

About Louisiana in brief

Louisiana is a state in the Deep South region of the South Central United States. It is the 19th-smallest by area and the 25th most populous of the 50 U.S. states. The state’s capital is Baton Rouge, and its largest city is New Orleans. Louisiana was named after Louis XIV, King of France from 1643 to 1715. It has more Native American tribes than any other southern state, including four that are federally recognized, ten that are state recognized, and four that have not received recognition. Louisiana frequently ranks low in terms of health, education, and development, and high in measures of poverty. In 2018, Louisiana was ranked as the least healthy state, with high levels of drug-related deaths and excessive alcohol consumption, while it has had the highest homicide rate in the United States since at least the 1990s. The Poverty Point culture may have reached its peak around 1500 BC, making it the first complex culture, and possibly the first tribal culture in North America. The Louisiana Territory stretched from present-day Mobile Bay to just north of thepresent-day Canada–United States border, including a small part of what is now the Canadian provinces of Alberta and Saskatchewan. It was both a French colony and for a brief period a Spanish one. In 1921, English was for a time made the sole language of instruction in Louisiana schools before a policy of multilingualism was revived in 1974. There has never been an official language in Louisiana, and the state constitution enumerates the right of the people to preserve, foster, and promote their respective historic, linguistic, and cultural origins.

Louisiana has a multicultural, multilingual heritage, being so strongly influenced by a mixture of 18th-century French, Italian, Haitian, Spanish, French Canadian, Native American, and African cultures that they are considered to be exceptional in the U. S. Louisiana is bordered by the state of Texas to the west, Arkansas to the north, Mississippi to the east and the Gulf of Mexico to the south. Much of the state’s lands were formed from sediment washed down the Mississippi River, leaving enormous deltas and vast areas of coastal marsh and swamp. These contain a rich southern biota; typical examples include birds such as ibises and egrets. There are also many species of tree frogs, and fish such as sturgeon and paddlefish. In more elevated areas, fire is a natural process in the landscape and has produced extensive areas of longleaf pine forest and wet savannas. These support an exceptionally large number of plant species, including many Species of terrestrial orchids and carnivorous plants. The Middle Archaic period was the site of the earliest dated, complex constructions in the Americas. An 11-mound complex, it was built about 5400 BP. The Middle archaic sites of Caney and Frenchman’s Bend have also been securely dated to 5600–5000 BP, that seasonal hunter-gatherers organized to build complex earthwork constructions.

You want to know more about Louisiana?

This page is based on the article Louisiana published in Wikipedia (as of Dec. 30, 2020) and was automatically summarized using artificial intelligence.