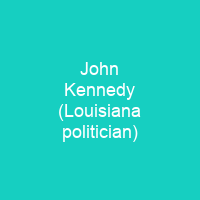 John Neely Kennedy is serving as the junior United States Senator from Louisiana. He previously served as the Louisiana State Treasurer from 2000 to 2017. Kennedy was an unsuccessful candidate for U.S. Senate in 2004 and 2008. In 2007, he switched parties and became a Republican.

John Neely Kennedy is serving as the junior United States Senator from Louisiana. He previously served as the Louisiana State Treasurer from 2000 to 2017. Kennedy was an unsuccessful candidate for U.S. Senate in 2004 and 2008. In 2007, he switched parties and became a Republican. In 2016, when U. S. Senator David Vitter opted not to seek re-election, Kennedy once again ran for Senate. He finished in first place in the November nonpartisan blanket primary and went on to defeat Democrat Foster Campbell 61–39% in the December runoff before being sworn in on January 3, 2017. He has written and published the following books and articles: Louisiana State Constitutional Law, The Dimension of Time in the Louisiana Products Liability Act, The Role of the Consumer Expectation Test Under Louisiana’s Products Li liability Doctrine, and The Federal Power Commission, Job Bias, and NAACP v. FPC. He has also served as an adjunct professor at Louisiana State University’s Paul M. Hebert Law Center in Baton Rouge from 2002 to 2016. Kennedy is a graduate of Vanderbilt University and the University of Virginia School of Law. He also studied at Magdalen College in Oxford, England, where he earned a Bachelor of Civil Law degree with first class honours.

He is a member of the Order of the Coif and was elected president of his senior class at Vanderbilt. He was elected to the Louisiana Commission for Government, which he served on in his official capacity as State Treasurer, in 1999. In 2008, Kennedy was defeated, 52 to 7 percent, by Democratic Senator Mary Landrieu; the same year, he was elected for a third time to the U.N. General Assembly. In 2012, Kennedy campaigned for the United States Senate seat held by retired Democrat John Breaux, who ran as a Democrat in the state’s jungle primary. In 2014, Kennedy announced that he would succeed Vitter as Senator. In 2015, he defeated his single opponent challenger with 80 percent of the vote. Kennedy endorsed Democratic presidential candidate John Kerry over George W. Bush in the 2004 election. In the 2008 election, Kennedy endorsed Republican presidential nominee John McCain in Louisiana, but Obama was defeated nationwide. In 2010, Kennedy ran for a fourth time as a Republican, this time seeking to succeed Republican Senator John McCain, who was elected nationwide.

You want to know more about John Kennedy (Louisiana politician)?

This page is based on the article John Kennedy (Louisiana politician) published in Wikipedia (as of Jan. 04, 2021) and was automatically summarized using artificial intelligence.