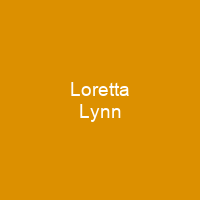 Loretta Lynn is an American singer songwriter. She is famous for hits such as “You Ain’t Woman Enough” and “Don’t Come Home A-Drinkin'” Lynn has scored 24 No. 1 hit singles and 11 number one albums. Her bestselling 1976 autobiography, Coal Miner’s Daughter, was made into an Academy Award–winning film of the same title in 1980.

About Loretta Lynn in brief

Loretta Lynn is an American singer songwriter. She is famous for hits such as “You Ain’t Woman Enough” and “Don’t Come Home A-Drinkin'” Lynn has scored 24 No. 1 hit singles and 11 number one albums. Her bestselling 1976 autobiography, Coal Miner’s Daughter, was made into an Academy Award–winning film of the same title in 1980, starring Sissy Spacek and Tommy Lee Jones. She ended nearly 50 years of touring on the road after she suffered a stroke in 2017 and then broke her hip in 2018. Lynn has received numerous awards and other accolades for her groundbreaking role in country music, including awards from both the Country Music Association and Academy of Country Music as a duet partner and an individual artist. She has been nominated 18 times for a GRAMMY Award, and has won 3 times. Lynn is the most awarded female country recording artist and the only female ACM Artist of the Decade. She was inducted into the Nashville Songwriters Hall of Fame in 1988, and the Songwriters Fame in 2008, and she was awarded the Presidential Medal of Freedom by President Barack Obama in 2013. Her debut appearance on the Grand Ole Opry was on October 15, 1960. Her album Van Lear Rose was released in 2004, and was produced by the alternative rock musician Jack White White. Her later hits include “Fist City”, “One’s on the Way”, and “Coal miner’s Daughter” Lynn is first cousins with country singer Patty Loveless. The former Miss America, Venus Ramey was also her cousin.

Lynn’s music was inspired by issues she faced in her marriage. She increased the boundaries in the conservative genre of country music by singing about birth control, repeated childbirth, double standards for men and women, and being widowed by the draft during the Vietnam War. Country music radio stations often refused to play her music, banning nine of her songs, but Lynn pushed on to become one of countryMusic’s legendary artists. Lynn was named after the film star Loretta Young, and her siblings are of Irish and Cherokee descent. She became a part of the country music scene in Nashville in the 1960s. She cut her first record, \”I’m a Honky Tonk Girl\”, in February 1960. In 1967, she had the first of 16 No. 1 hits, out of 70 charted songs as a solo artist and aDuet partner. Lynn won two Grammys and was nominated for five Grammys for five different albums, including two for her album “Van Lear Rose” in 2004. She made her public debut on September 25, 1962, joining on stage in Nashville. She began singing in local clubs, singing local tribute albums and one tribute album in local music clubs, and began singing on local compilation albums in local radio stations in the late 1960s and early 1970s. Her husband, Oliver Vanetta “Doolittle” Lynn, bought her a USD 17 Harmony guitar in 1953, and over the following three years, she worked to improve her guitar playing.

You want to know more about Loretta Lynn?

This page is based on the article Loretta Lynn published in Wikipedia (as of Dec. 05, 2020) and was automatically summarized using artificial intelligence.