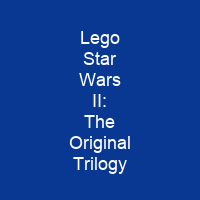 About Lego Star Wars II: The Original Trilogy in brief

Lego Star Wars II: The Original Trilogy is a Lego-themed action-adventure video game developed by Traveller’s Tales and published by LucasArts and TT Games Publishing. It was released on 11 September 2006. It is based on the Star Wars science fiction media franchise and Lego Group’s Lego Star Wars eponymous Star Wars-themed toy line. The game allows players to assume the roles of over 50 Lego versions of characters from the film series; customized characters can also be created. It has sold over 8. 2 million copies worldwide as of May 2009. Critics praised the game for its comedic and \”adorable\” portrayal of the films and due to preference for the original trilogy over the prequel trilogy. However, the game’s low difficulty, and its Game Boy Advance and Nintendo DS versions in general, were received more poorly. A mobile phone adaptation was later developed by Universomo, published by THQ, and released on 19 December 2006. Lego Star wars II and its predecessor were compiled in Lego StarWars: the Complete Saga, released in 2007. The gameplay is from a third-person perspective, and takes place in a 3D game world that contains objects, environments, and characters designed to resemble Lego pieces. During levels, the player defeats enemies, builds objects out of Lego bricks, and drives vehicles. Certain levels are played entirely while piloting vehicles, including a TIE fighter, a Snowspeeder, and the Millennium Falcon.

Within each level is a hidden power brick, which is collected when a certain number of gold bricks are collected. The player’s health is represented by four hearts; when these hearts are depleted, the player dies, and a small amount of their studs bounce away, but they instantly respawn and can often re-collect the lost studs. In a small area outside the cantina, players may view collected vehicles. The game is broken into levels, which are accessed from the Mos Eisley cantina. The locations include Hoth, Bespin, Dagobah, Tatooine, the Death Star, and Endor. Each level also contains ten hidden minikits, that is ten pieces of a Star Wars vehicle of a certain type. When all ten have been collected, a player is awarded a gold brick, such as a spigot, that unlocks a certain level that unlocks other rewards such as power bricks and spigots that are also awarded when a number of free bricks are also collected. In the Story Mode, players must first be played in Story Mode. This unlocks the next level as well as a Free Play mode for the recently completed level, and all levels can be replayed in the Free Play-off mode to be unlocked in all those types of secret items that are available: gold bricks, three minikit, and power bricks. The story mode restricts playable characters followed in the levels the levels are based on, while Free play-off-ers can be played to those that are not.

You want to know more about Lego Star Wars II: The Original Trilogy?

This page is based on the article Lego Star Wars II: The Original Trilogy published in Wikipedia (as of Nov. 21, 2020) and was automatically summarized using artificial intelligence.