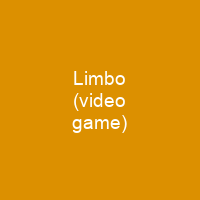 Limbo is a puzzle-platform video game developed by Playdead. The player guides an unnamed boy through dangerous environments and traps as he searches for his sister. Game achievements include finding hidden insect eggs, completing the game with five or fewer deaths, and finding the player’s sister in the game’s final puzzle. Limbo received positive reviews, but its minimal story polarised critics.

About Limbo (video game) in brief

Limbo is a puzzle-platform video game developed by Playdead. The player guides an unnamed boy through dangerous environments and traps as he searches for his sister. The game is presented in black-and-white tones, using lighting, film grain effects and minimal ambient sounds to create an eerie atmosphere often associated with the horror genre. Limbo received positive reviews, but its minimal story polarised critics. The title was the third-highest selling game on the Xbox Live Arcade service in 2010, generating around USD 7. 5 million in revenue. Playdead’s next title, Inside, was released in 2016, and revisited many of the same themes presented in Limbo. Game achievements include finding hidden insect eggs, completing the game with five or fewer deaths, and finding the player’s sister in the game’s final puzzle. It was named as one of the top games for 2010 by several publications, and has been listed among the greatest games of all time by some critics. It has since been ported to several other systems, including the PlayStation 3, Linux and Microsoft Windows, and is still available on Xbox 360 and PlayStation 3. The developer called the style of play \”trial and death\”, and used gruesome imagery for the boy’s deaths to steer the player from unworkable solutions. Some reviews proposed that Limbo had an ideal length, with no limits placed on how many times this can occur. A common point of criticism from reviewers was that the high cost of the game relative to its short length might deter players from purchasing the title, but some reviews proposed it had an Ideal length.

Limbo is presented through dark, greyscale graphics and with minimalist ambient sounds, creating an eerie, haunting environment. The dark visuals also serve to conceal numerous lethal surprises, including such environmental and physical hazards as deadly bear traps on the forest floor, or lethal monsters hiding in the shadows. Many of these traps are not apparent until triggered, often killing the boy. Some deaths are animated with images of the boy’s dismemberment or beheading, although an optional gore filter on some platforms blacks out the screen instead of showing these deaths. The game’s second half features mechanical puzzles and traps using machinery, electromagnets, and gravity. As is typical of most two-dimensional platform games, the boy can run left or right, jump, climb onto short ledges or up and down ladders and ropes, and push or pull objects. After completing the final puzzle, the player is thrown through a pane of glass and back into the forest. After he wakes up and recovers from the pain, he encounters a female character, who he thinks might be his sister, but is prevented from reaching her The forest eventually gives way to a crumbling city, and he is forced to hop off to a cocoon. After breaking free from the threads that attached him to the roof, he eventually gets them off, and eventually reaches a few human characters who either attack him, run away, or are dead or are only a few feet away.

You want to know more about Limbo (video game)?

This page is based on the article Limbo (video game) published in Wikipedia (as of Nov. 11, 2020) and was automatically summarized using artificial intelligence.