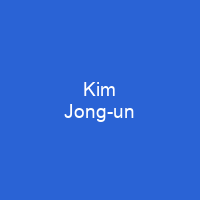 Kim Jong-un is the second child of Kim Jong-il and Ko Yong-hui. His official birthdate was 8 January 1982, but South Korean intelligence officials believe the actual date is a year later. It is thought that his official birth year was changed for symbolic reasons; 1982 marks 70 years after the birth of his grandfather, KimIl-sung. Kim is widely believed to have ordered the 2017 assassination of his half-brother, Kim Jongnam, in Malaysia.

About Kim Jong-un in brief

Kim Jong-un is the second child of Kim Jong-il and Ko Yong-hui. He is the grandson of Kim Il-sung, who was the founder and first supreme leader of North Korea from its establishment in 1948 until his death in 1994. He has presided over an expansion of the consumer economy, construction projects and tourist attractions. Kim expanded North Korea’s nuclear program which led to heightened tensions in the 2017–18 North Korea crisis. In July 2012, Kim was promoted to the highest rank of Marshal in the Korean People’s Army, consolidating his position as Supreme Commander of the Armed Forces. In 2014, a UNHRC report suggested that Kim could be put on trial for crimes against humanity. Kim is widely believed to have ordered the 2017 assassination of his half-brother, Kim Jongnam, in Malaysia. North Korean state media often refers to him as \”the Marshal\” or \”Dear Respected\”. Kim’s leadership has followed the same cult of personality as his grandfather and father. Kim’s official birthdate was 8 January 1982, but South Korean intelligence officials believe the actual date is a year later. It is thought that his official birth year was changed for symbolic reasons; 1982 marks 70 years after the birth of his grandfather, KimIl-sung. His elder brother was born in 1981, while his younger sister, Kim Yo-jong, is believed to be born in 1987. Kim was described by classmates as shy, a good student who got along well with his classmates, and was a basketball fan.

According to some reports, Kim had a close relationship with the American National Basketball Association and had a fascination with girls. He attended the private International School of Berne in Gümligen in Switzerland under the name \”Chol-pak\” or\’Pak-chol\’ from 1993 to 1998. He was described as shy and indifferent to political issues, but had a distinguished interest in sports. He left the school abruptly in the autumn of 2000. He had a relationship with North Korea ambassador in Switzerland, Ri Chol, who acted as a mentor and acted as his mentor. Kim Jong Un is the son of an employee of the North Korean embassy in Bern. He also attended the Liebefeld Steinhölzli state school in Köniz near Bern under thename \”Pak-un\’ or\’Un-pak\’ from 1998 until 2000 as the sonof an employee of theNorth Korean embassy. He reportedly told a friend that he was the son. of the ambassador, Michael Jordan, who told reporters that he had told him he was a North Korean leader’s son. Kim has ordered the purge or execution of several North Korean officials, as well as the mother of the two youngest sons, who lived in Geneva for some time. In 2018 and 2019, Kim took part in a diplomatic process, meeting with South Korean President Moon Jae-in and US President Donald Trump. The US Treasury Department lists Kim Jong -un’sofficial birthdate as 8 January 1984.

You want to know more about Kim Jong-un?

This page is based on the article Kim Jong-un published in Wikipedia (as of Jan. 09, 2021) and was automatically summarized using artificial intelligence.