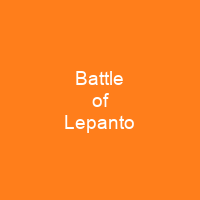 The Battle of Lepanto took place on 7 October 1571 in the Gulf of Patras. It was the largest naval battle in Western history since classical antiquity. The victory of the Holy League is of great importance in the history of Europe and of the Ottoman Empire.

About Battle of Lepanto in brief

The Battle of Lepanto took place on 7 October 1571 in the Gulf of Patras. It was the largest naval battle in Western history since classical antiquity, involving more than 400 warships. The victory of the Holy League is of great importance in the history of Europe and of the Ottoman Empire, marking the turning-point of Ottoman military expansion into the Mediterranean. The Christian coalition had been promoted by Pope Pius V to rescue the Venetian colony of Famagusta on the island of Cyprus, which was being besieged by the Turks. It has long been compared to the Battle of Salamis, both for tactical parallels and for its crucial importance to the defense of Europe against imperial expansion. The defeat at Lepanto further exemplified the rapid deterioration of Ottoman might under Selim II, and Christians rejoiced at this setback for the Ottomans. The battle was the last major engagement in the Western world to be fought almost entirely between rowing vessels, namely the galleys and galeasses which were the direct descendants of ancient trireme warships. Over the following decades, the increasing importance of the. galleon and the line of battle tactic would displace the galley as the major warship of its era, marking. the beginning of the ‘Age of Sail’ The victory was also of great symbolic importance in a period when Europe was torn by its own wars of religion following the Protestant Reformation. The banner for the fleet, blessed by the Pope, reached the Kingdom of Naples on 14 August 1571.

There, in the Basilica of Santa Chiara, it was solemnly consigned to John of Austria, who had been named the leader of the coalition after long discussions among the allies. All members of the alliance viewed the Ottoman navy as a significant threat, both to the maritime trade in the Mediterranean Sea and to the security of continental Europe itself. The combined Christian fleet was placed under the command of John Colonna with Marcantonio Colonna as his principal force. The various Christian contingents met at Messina, Sicily, in July and August, and met the main force that consisted of Venice, the Spanish Empire, the Papal States, the Republic of Genoa, the Duchies of Savoy, Urbino and Tuscany, the Knights Hospitaller, and others. On 17 August Marco Antonio Bragadin was flayed alive and his corpse hung on Mustafa’s galley together with the heads of theVenetian commanders, Astorre Baglioni, Alvise Martinengo, and Gianantonio Querini. The Ottoman commander, Lala Kara Mustafa Pasha, had lost some 50,000 men in the siege, and broke his word, imprisoning the Venettians. The Venetians had surrendered after being reassured that they could leave Cyprus freely. On 1 August the Ottoman commander had lost his word and imprisoned them, but he broke his promise. The fleet moved to Sicily and, leaving Messina to reach the port of Viscardo in Cephalonia.

You want to know more about Battle of Lepanto?

This page is based on the article Battle of Lepanto published in Wikipedia (as of Jan. 04, 2021) and was automatically summarized using artificial intelligence.

Our Lady of the Rosary

Our Lady of the Rosary