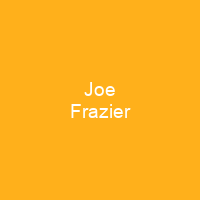 Joseph William Frazier was an American professional boxer who competed from 1965 to 1981. As an amateur, he won a gold medal at the 1964 Summer Olympics. He reigned as the undisputed heavyweight champion from 1970 to 1973. He lost to only two fighters, both former Olympic and world heavyweight champions: twice to Muhammad Ali, and twice to George Foreman. His best-known punch was a powerful left hook.

About Joe Frazier in brief

Joseph William Frazier was an American professional boxer who competed from 1965 to 1981. He was known for his strength, durability, formidable punching power, and relentless pressure fighting style. As an amateur, he won a gold medal at the 1964 Summer Olympics. He reigned as the undisputed heavyweight champion from 1970 to 1973. Frazier’s style was often compared with that of Henry Armstrong and occasionally Rocky Marciano. He lost to only two fighters, both former Olympic and world heavyweight champions: twice to Muhammad Ali, and twice to George Foreman. His attitude towards Muhammad Ali in later life was largely characterized by bitterness and contempt, interspersed with brief reconciliations. Frazier was diagnosed with liver cancer in late September 2011 and admitted to hospice care. He died of complications from the disease on November 7, 2011. His son Marvis became a boxer, but Marvis was knocked out in the first round by an up-and-coming Mike Tyson in 1986. His daughter Jacqui Frazier-Lyde also boxed professionally and is a former WIBA world light-heavyweight champion. She ended her career with a record of 13 wins and 1 loss, with her sole loss coming in a majority decision points loss to Laila Ali, the daughter of Muhammad Ali. In 1999, The Ring magazine ranked him the eighth greatest heavyweight. BoxRec ranks him as the 18th greatest heavyweight of all time. His best-known punch was a powerful left hook, which accounted for most of his knockouts.

He is an inductee of both the International Boxing Hall of Fame and the World BoxingHall of Fame. He also made cameo appearances in several Hollywood movies and two episodes of The Simpsons. In the early 1950s, Frazier’s parents worked on the farm with two mules named Buck and Jenny. The farmland was only cotton and watermelons, which is what people called the country called “white, which isn’t worth a damn” Frazier’s father had his left hand burned and part of his forearm amputated in a tractor accident the year his son was born. He said he was always close to his father, who carried him when he was a toddler to the still where he made his bootleg corn liquor, and into town on Saturdays to buy the necessities that a family of 10 needed. Young Frazier was affectionately called \”Billie Boy.\’ He was born in Beaufort, South Carolina, and grew up in a rural community of Beaufort called Laurel Bay. His father was a sharecropper, and the Fraziers worked as sharecroppers on the 10 acres of farmland. He and his wife Dolly had been in their car when Arthur Smith, who was drunk, passed and made a pass at them, hitting Dolly in the foot and several times in his arm. Dolly was rebuffed. Smith was convicted and sent to prison but did not stay long, but Dolly said, “If you were a good work, the white man took you out of jail and kept you busy on theFarm”

You want to know more about Joe Frazier?

This page is based on the article Joe Frazier published in Wikipedia (as of Jan. 04, 2021) and was automatically summarized using artificial intelligence.